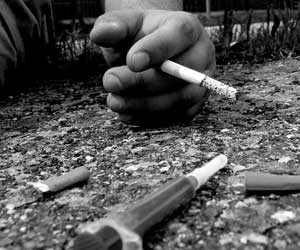 A telephone interview with Joanna F. would have created a quite different impression. She is articulate, with an excellent command of English, and speaks willingly and frankly about her life. In person, this 22-year-old retains these traits, but they are difficult to reconcile with the slight, gaunt figure who drifts into the office of drug rehabilitation organisation MONAR’s detox centre just outside Krakow.

Joanna began using opiates when she was 15 years old. In just seven years, the drugs have taken their toll. She is desperate to get out of a situation that has affected every aspect of her life, most notably her health — she has hepatitis C and is HIV positive.

Like many young people, Joanna’s drug use began under peer pressure but descended quickly into something much more personal. She said: “There were problems with the police, and my health was getting very bad. My boyfriend and my family told me I must go to detox. I was in another rehabilitation centre for a month, but I still saw my friends and started using drugs again,” she recalls.

Joanna could be the personification of MONAR’s raison d’etre. The organisation has been operating across Poland since 1978, and today it offers a range of programmes for everyone whose life has been affected by drug use. As well as rehabilitation for drug addicts and help for their families, MONAR also takes a drug and harm prevention stance, following up front-line, emergency work with social re-adaption programmes.

Joanna is proof that MONAR’s work in Krakow is both necessary and effective. Despite her previous failed attempt to get off drugs, she has taken the opportunity offered by the organisation, and has plans for as ‘normal’ a life as possible. She said: “I want to have a family with my boyfriend, and study. I want to work in something creative, I know I have a lot of options.”

It’s going to be a long haul, and even Joanna is not sure that she will stay the distance. When the Krakow Post spoke to her she was relatively upbeat – with hopes that she would complete the two-week detox programme and work successfully through the next 12 months of rehabilitation.

Unfortunately the MONAR project in Krakow, which draws together drug rehabilitation professionals with various specialities, is under threat from the national organisation, which is demanding a more orthodox approach to treatment — at least this is the view of Grzegorz Wodowski and his staff at Krakow MONAR.

There is a question mark over the financial contribution that the Krakow organisation makes to the national, parent body. Grzegorz says that there is a long-established and undisputed system in place, which has regional MONAR projects paying a proportion of their income (all gained from charitable sources) towards the overall running of the national organisation. But these costs are rising and many at the Krakow organisation are not sure where the money is going – something they find deeply worrying.

During a meeting at MONAR’s drop-in centre in Kazimierz, Grzegorz said: “It is not a transparent system so we have no way of knowing what is going on. There is a question about whether I should send the money to Warsaw, or buy something that is needed here and improve the infrastructure. I should have disabled access here by the end of 2012. The money could be used for a needle exchange programme to help 500 people.”

This is where the rift deepens. Grzegorz, and many others at MONAR in Krakow, have long advocated the idea that drug substitution — the use of methadone for example — is better for some addicts than outright abstinence. They are not alone — the World Health Organisation also recognises and recommends substitution for some opiate users.

MONAR nationally disagrees, and the row has now escalated to the point that MONAR Krakow has sent an open letter to the mayors of several cities – Krakow and Warsaw included – and to drug and health policy makers, outlining what they see as a severe threat not just to the service in Krakow, but elsewhere, and ultimately to the people who come to MONAR for help.

In this letter, MONAR Krakow express their “grave concerns” that Poland’s largest non-governmental drug treatment organisation is heading in a “dangerous direction.” They continue: “MONAR’s statute already excludes the provision of opiate substitution treatment, despite the fact that this treatment is the most effective of all available methods for opiate users, and is recommended by the World Health Organisation. It seems that any challenge to the abstinence-only philosophy is violently responded to by the organisation’s management. As the experience of Krakow illustrates, regional branches and individuals… are under severe attack.”

A stalemate has developed. MONAR Krakow continues to offer a ‘one-stop’ service – acting, Grzegorz insists, within the boundaries of national statute. He is not willing to predict how the situation will develop, but at the detox centre there is another very obvious and pressing reason why the organisation in Krakow needs to keep offering its integrated service.

That reason is Ewa. She is much older than Joanna, and on her ninth attempt at rehabilitation. Ewa has accepted that she is never going to be ‘clean,’ but she is desperate to get on with her life by managing rather than eradicating her drug problem. The official line, and the accepted wisdom of those with no experience of drug rehabilitation, and Polish law, all frown on this approach; ‘zero tolerance’ is still seen as the only way forward. But nobody at MONAR in Krakow raises an eyebrow at Ewa’s predicament; they know that, given the right resources, national support and the independence to do things their way, they might just be able to help Ewa live her life.