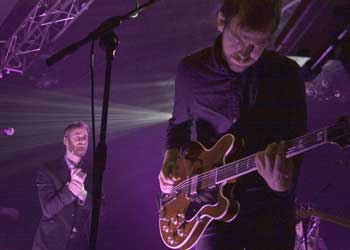 Only a handful of bands have the ability to sell out venues with minimal advertising or fuss and yet remain relatively unknown. Ohio’s The National manage this feat with aplomb. Their lo-fi indie Americana sound has not exactly stormed the billboard charts in the States, but their last three albums (2005’s Alligator 2007’s Boxer and 2010’s High Violet) have each earned more critical acclaim than the last, and people are slowly starting to realize that this is a band that needs to be heard. The band’s word-of-mouth reputation is close to catapulting them into the mainstream, but Studio’s 1000 capacity suited them fine this evening.

Entering the stage to the soothing melody of Neil Young’s On the Beach, the five-piece were augmented by a trumpet player and trombonist, and a keyboard which would be used sporadically during the show. Runaway’s opening bars had the crowd responding enthusiastically, and singer Matt Berninger quickly warmed to them – “we’ve just come off of a tour of Holland with loads of kinda sit-down places,” he commented before launching into Anyone’s Ghost – “but we prefer this kinda place, it’s more fun for us.” Standing for 90 minutes is a small price to pay for a fantastic atmosphere, and as Berninger’s gravelly baritone seeped over the crowd, The National began to weave their magic.

Mistaken For Strangers had the crowd singing along enthusiastically, but I couldn’t take my eyes off the drummer, who absolutely made this song work live, making it look effortless. Looking like a cross between John Lennon and John McEnroe with aviator glasses and lank hair bizarrely kept in place by a sweat band, Bryan Devendorf’s insistent, regimental drumming is the basis for much of The National’s best work. Brainy’s refrain “you might need me more than you think you will” sends shivers down the spine. Bathed in purple light, Berninger (who has a reputation for getting wrecked on red wine on stage) was bent on having a good time, frequently swigging something from a large cup. Slow Show and Squalor Victoria followed; “You know I dreamed about you for 29 years before I saw you” representative of the poetry lurking in their lyrics. Conversation 16’s frankly disturbing “I was afraid I’d eat your brains ‘cos I’m evil” open up a lyrical palette that combines love and cannibalism in a way that may never have been done before.

But The National go beyond typical miserablism and seem to have an ability to transcend indie stereotypes with a combination of lyrical obliqueness and honesty. This is the kind of band you can imagine enjoying a pint with and chatting to about the state of the world. “Gadaffi’s gone!” a heckler shouted, somewhat previously. Unflinching, Berninger launched into Afraid of Everyone. Vulnerable, heartfelt and beautiful – you want to put your arms around Berninger’s shoulders and tell him that everything is going to be okay. Bloodbuzz Ohio is another highlight. Again backed by brilliant drumming, the tempo is upped briefly and the crowd get a chance to see the band rock out a bit. One criticism that has been leveled at the band – even by good friend Michael Stipe (whose band The National are often compared to) – is that their songs have a tendency to sound the same, and you get the feeling that they could come out of their shells more at times. Guitarists Aaron and Bryce Dessner do just that at the song’s climax, raising their instruments above their heads in true rock tradition whilst still playing them, much to the crowd’s delight. Lit Up, an old number from Alligator, continues in a similar vein, before Sorrow reminds us why we love the band so much when they are in reflective mood – “sorrow found me when I was young/sorrow waited, sorrow won” – utterly beguiling.

But it is during the encore that the band shows its true colours and really reaches out to the crowd. First, Berninger leaps from the stage, during Mr November, crowd surfs a bit, and then starts wading through them whilst still singing, his extended mic lead dragging behind him, before athletically shinning up a stairwell from the wrong side via a mixing desk, singing all the while. Briefly I find myself staring into the whites of Berninger’s eyes and I think: this guy means it. The crowd parted to let him back on stage for the final encore Vanderlyle Crybaby Geeks. The lights went off, the mics went off. The applause died down and the whole band, in a circle, launched into an acoustic version of the song. Everyone sang along; suddenly the show became a group event of which everyone was a part. It was an incredible moment, and the best possible ending to the show.

The National – you might need them more than you think you will. I think you’d better follow them around.