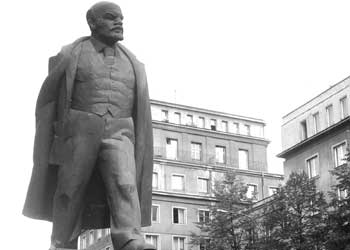 Krakow and Nowa Huta are unlikely siblings. Krakow is cultured, refined and conservative; Nowa Huta is industrial, brutalist and revolutionary. Although they have been part of the same administrative entity since 1951, they still feel like forcibly conjoined twins rather than parts of the same city. Of the two, Nowa Huta undoubtedly has the reputation as the black sheep, but a new exhibition aims to challenge the myths about Krakow’s brutal brother.

According to the Nowa Huta 1949+ exhibit at the Historical Museum of Krakow, the number one Nowa Huta myth is that the industrial new town was built next to Krakow as a punishment, or as an attempt to overwhelm Krakow’s intellectual, conservative resistance to the Communist authorities with a flood of crude proletarianism.

Folklore says that Krakow was singled out for retribution because of its unique resistance in the notorious 1946 People’s Referendum. The plebiscite asked Poles to say ‘yes’ or ‘no’ to three proposals: that the senate should be abolished, that the economy should be restructured along Communist lines and that Poland’s western borders should be “consolidated” along the Oder-Neisse line. Powerful Communist elements in the government rigged the results to show an overwhelming vote of “three times yes.” Only in Krakow were opposition parties able to publish truthful returns, which showed only 20 percent of voters saying ‘yes’ three times. The myth says that this embarrassment was punished by the construction of giant polluting chimneys looming over the city’s ancient churches.

“Not true,” says Maria Lempart, co-curator of the exhibition. “The first decision to build the steel mill here was taken in February 1949. In fact, in December 1948 engineers were planning to build the mill near Gliwice [90 kilometres west of Krakow]” she explains. The decision to construct the giant Vladimir Lenin Steel Works, and its accompanying ideal socialist town, near Krakow seems to have been based on the presence of good rail links for bringing raw materials from east and west, the proximity of the river to supply water, and a site that was elevated enough to avoid flooding. The fact that Krakow was a centre of learning, with established schools of engineering and scientific research departments, added to the location’s attractiveness as a site for a major industrial investment.

The second great Nowa Huta myth is that it is a godless place. It is certainly true that Nowa Huta residents fought long and hard to secure the construction of a new place of worship throughout the 1960s, but it is not true that the settlement was deliberately built without one. The original plans for Nowa Huta included a site for a grand church and the Union of Polish Architects held a competition to find a winning design in the 1950s. It is also worth noting that there were pre-existing churches within the district that residents used regularly—though they were too small for the rapidly-growing population. Today, there are 10 new churches in the area, including the huge Arka Pana (Ark of the Lord), which was the first new place of worship built in Nowa Huta. Future pope Karol Wojtyła laid the foundation stone in 1969.

Nowa Huta myth number three says that the industrial suburb smothered the Old Town with pollution. In fact, the steel mill was situated to the east of Krakow because the prevailing winds are westerly — they blow from west to east taking industrial air pollution away from the historical centre. It is true that the Old Town has suffered from poor air quality, but the primitive domestic heating and vehicle exhausts of residents’ cars have historically been the principal cause.

A large part of the Nowa Huta 1949+ exhibition focuses on the paradox that a town built as an ideal socialist community became a hotspot of opposition to the socialist state. The sturdy residents of Nowa Huta were a painful thorn in the side of the government of the People’s Republic for a long time. Two campaigns of civil resistance in particular, demonstrations by the Defenders of the Cross in the 1960s and pro-Solidarity marches in the 1980s, gave the authorities major headaches.

The infamous statue of Lenin that graced Nowa Huta’s central Aleja Róż (Avenue of Roses) was often the focus of resentment. Erected in 1973 it was hated from the first, both as a symbol of Soviet oppression and because the great expense of casting it cost workers at the steel mill a proportion of their annual bonuses. Expressions of residents’ ire ranged from black humour to explosives. A cast of part of the monument in the exhibition is mysteriously flanked by a pair of old boots and a rusty bicycle. “It was a famous joke,” explains Maria Lempart: “One time, people put an old bicycle and old shoes next to the statue along with a note that read: ‘Here are some old shoes and a bike, now out of Nowa Huta take a hike!’”

On the night of 18 April, 1978, unknown activists took rather more direct action by detonating explosives at Lenin’s feet. Windows around the entire plaza were shattered, but the statue survived with chunks blown out of its leg. The culprits were never caught and their exploits became the subject of an epic poem titled An Attempt at Blowing Up the Statue of Lenin. The striding Lenin was finally taken down by the authorities in December 1989 after a series of fire bombings and riots. It now resides in a private collection in Sweden, but the Nowa Huta museum has a fragment of its plinth.

Apart from the church that was never built, there were several other elements of the planned town that never made it off the drawing board. The exhibition has fascinating photos of architectural models and drawings showing features of an alternative-reality Nowa Huta that did not come to pass.

Today’s surprisingly charming view from the very centre of the community across Łąki Nowohuckie (Nowa Huta Meadows) towards the river was supposed to include a huge recreational lake. It was scrapped in favour of the more modest Zalew Nowa Huta (Nowa Huta Lake) on the eastern edge of the development. Another major unrealised project had the happy result of giving Nowa Huta a pretty park in the centre of town. Park Ratuszowy, which occupies an entire block of the street plan, was, as the name suggests, the planned location for a town hall and other administrative buildings. Budgetary restrictions and a shift away from the Socialist Realism style of architecture meant that the soaring ratusz (town hall) was never built.

Nowa Huta has enjoyed a boost in its reputation in recent years. It is no longer regarded as a grim and dangerous quarter to be avoided. Its iconic status as a socialist experiment and centre of anti-communist resistance even attracts its share of adventurous tourists. On the other hand, little of the flood of renovation money that has transformed the centre of Krakow has found its way to the far end of Aleja Jana Pawła II.

January saw the establishment of Krakow’s first Commission for Social Dialogue—a species of NGO that has successfully worked with local governments to promote redevelopment in many other Polish cities. The Committee for the Revitalization of Nowa Huta has promised to “push, lobby and fight” for this neglected but populous corner of the city. Its chief goals are a rationalisation of the proposed route of the S7 Expressway through the district, a plan for Nowa Huta Meadows and the launch of an architectural competition for the revitalisation of Aleja Róż.

Krakow’s city council is due to vote on the establishment of a development management plan that will cover the oldest parts of Nowa Huta. The package will include planning protection for the unique urban fabric of the area and, hopefully, pave the way for parts of Nowa Huta to be added to the list of UNESCO World Heritage Sites. If that day ever comes, perhaps Krakow and its unseemly sibling will be able to stand comfortably arm in arm.

You can see the Nowa Huta 1949+ exhibition at the Nowa Huta branch of the Historical Museum of Krakow Wednesday to Saturday and on selected Sundays and Tuesdays. See www.mhk.pl for more details.