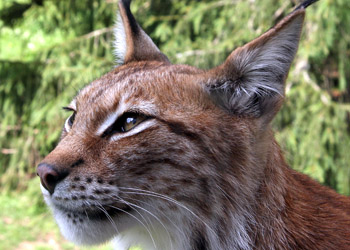 Only the brown bear and the wolf surpass it in the predatory stakes in Europe, but the lynx in Poland needs help from the one species that has been instrumental in reducing its numbers to dangerous levels – homo sapiens.

The Eurasian lynx (ryś, in Polish) can be seen in the forests and mountains to the east and south of Krakow. But it would be a remarkable stroke of luck for a visitor out of the city for a day to come across one of these graceful felines. For lynx are naturally shy animals – and with good reason; they are prized for their pelts, and were hunted legally in Poland until a ban was imposed in 1995. Now, there are no more than 250 left in the wild.

In order to help protect those that remain, a clinic is to open in Przemyśl. Although hunting lynx is not allowed, they are  still at risk from poachers and road accidents. WWF, the wildlife charity, is also helping to boost the lynx population, by relocating animals from Estonia, beginning this month.

Pawel Sredzinski, leader of the WWF Poland Lynx Campaign, said: “The lynx’s survival is at stake in Poland. With the transfer of animals from Estonia, we hope to repopulate the forests and prevent the species from extinction in the country.”
The WWF has already carried out a similar project in Switzerland, where lynx were hunted to extinction. It costs the organisation about 10,000 PLN to relocate just one animal to Poland – information about helping with fundraising can be found at www.wwf.panda.org.

A Polish-Dutch research team have developed a new forensic method that allows a person’s hair colour to be determined from genetic material.

Working under Prof. Dr. Jan Sehn at the Institute of Forensic Research (IES) in Krakow, the team have developed a ground-breaking method, which it is hoped will allow criminal investigators to determine the hair colour of victims or perpetrators by examining human DNA.

DNA samples that can be used in the process may be obtained from a large range of biological samples, including traces found at crime scenes, tissue fragments or fragments of bone.
“Its use should accelerate the pace of investigations, and thus improve the functioning of the courts,” wrote Dr. Wojciech Branicki, Polish team leader, on the IES website. International patent protection for the method is now pending.

Dr. Branicki was also responsible for developing a similar DNA-examination technique for determining eye colour, which was used successful during the examination of the exhumed remains of General Wladyslaw Sikorski in 2008.

The IES has been in continuous operation since 1949, the year in which it was reopened after World War II. It owes its name and current location on ul. Westerplatte to Judge Jan Sehn, the first Head of the Department of Criminology at the Jagiellonian University. Since 1998, the IES has been a member of the European Network of Forensic Science Institutes.

The public prosecutor in Krakow has launched an investigation into a charity established by a man claiming to be a priest, amid fears of a 280,000 złoty fraud. The Foundation for Family Assistance and Disability Assistance was founded and represented by a man known as Jacek K, according to Gazeta Wyborcza. But it has since emerged that, although Jacek spent a year at the seminary in Kielce and six months with the Dominicans in Poznań, he was never ordained. The Foundation’s fundraising licence has been revoked.

A homeless windscreen cleaner has been jailed for nine years for stabbing a driver at a crossroads in Krakow. The attack happened on 6 April 2008, at Rondo Matecznego. The defendant, Salvatore J., began cleaning the windscreen of an Audi, which had stopped at the traffic lights. The driver gestured for him to stop, and got out of the car to chase him when he refused to do so. Salvatore J. stabbed the 31-year-old twice in the stomach, before escaping. Doctors said the driver could have died from his injuries. Salvatore J. was arrested a week later.

Two police officers are among a group of almost 70 people under investigation over allegations of motor insurance fraud in Krakow. The group is alleged to have swindled 800,000 złoty from insurance firms, by making claims for accidents that never happened. Gazeta Krakowska reported that 68 people had already been accused by the Public Prosecutor, and more were likely to be implicated. One man, Wojciech H., has already admitted his part in the fraud. He was fined 2,000 złoty and received an 18-month prison sentence, suspended for two years. If found guilty, the majority of the suspects face up to eight years in prison. The ringleader may be jailed for 12 years.

Preparations are underway in Krakow, for events to mark the forthcoming beatification of Pope John Paul II, on May 1. Fr. Robert Nęcek, spokesman for the Archdiocese of Krakow, told the Polish news agency PAP that it was too early to give precise details about the celebrations. However, it is expected that the Sanctuary of Divine Mercy at Łagiewniki will be the spiritual centre of the occasion in Krakow. There will also be concerts in the city, and the ceremony, due to take place in Rome, could be shown on big screens in Krakow.

A shortfall in flour stocks is set to affect the Krakow bread market, warn bakeries and pretzel sellers. If the dry summer was hard on Polish grain crops, autumn was even worse. Thanks to floods and droughts, grain stocks are now just about to run out for the winter, causing prices to soar. A pretzel on Krakow’s Market Square is now selling for 1.50 złoty, which is a 50-percent increase on last year. It might not sound much, but the price-sensitive pretzel is an indicator for related markets and bakers are predicting that consumers are to be hit by price surges in bread and related products in the near future. The price of flour has doubled since last winter. At the end of January this year, a kilogram cost roughly 1.50 złoty. The price of salt has risen by 60 percent during the same period, further pressuring the bread market.

No More Room for Heroes at Skalka

A tribute to Poland’s heroes of the arts and sciences is to be created at St Peter’s and St Paul’s church in Krakow — because the existing pantheon at the Skalka church is full up. Those buried at Skalka include the poet Czesław Miłosz, the composer Karol Szymanowski, and artist Stanisław Wyspiański. But monks of the Pauline order, which manages the pantheon, have said there is no space for future heroes. The new pantheon at SS Peter and Paul will cost 17 million złoty. It will be funded partly through sales of memorabilia at the church.

A woman who was drugged and sexually assaulted by a doctor treating her for alcoholism is seeking 100,000 złoty in damages. Prosecutors claimed the 58-year-old woman was raped by the doctor in her home. They said the victim’s son had come home and found the doctor, half-naked, standing over his mother.
The doctor was cleared of rape, but found guilty of sexual assault. He was sentenced to two-and-a-half years in prison, which was later suspended on appeal for two years. The woman is demanding compensation for “permanent psychological damage,” emphasizing that she had placed her trust in the doctor. At a private civil hearing in Krakow last month, the judge ordered the two parties to attempt to reach an agreement about “financial matters.” The case will be heard in full if no agreement is reached.