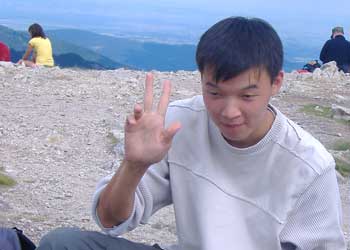 A Mongolian family resident in Krakow for 11 years will be granted permission to stay in Poland after being arrested by the Polish Border Guard and threatened with deportation in December 2010.

According to Ewa Piechota, spokeswoman for the Office for Foreigners in Poland, the family will return to Krakow by the end of the week, and more probably on 9 February.

The Batdavaa family, who are awaiting a final court hearing, were sent to a refugee centre in the Polish town of Przemyśl in December.

A few months ago, Chechen and Georgian detainees at the Przemyśl facility staged a brief hunger strike in protest at their living conditions.

Footage broadcast last week of the eldest of the three Batdavaa children, Khash-Erdene, defending his thesis at Krakow’s AGH (University of Science and Technology) with Polish Border Guard officers in attendance generated nationwide interest in their case.

Khash’s brother, Oyun, is currently a first-year student at AGH. He was the only member of the family allowed to remain in Krakow while waiting for a ruling by the Office for Foreigners and the courts.

Małopolska voivod (governor) Stanisław Kracik ordered the family moved to the refugee centre when their visas expired. Oyun was the only member of the family whose visa had not expired.

Kracik, who recently failed to become Mayor of Krakow, subsequently u-turned on this decision and offered legal support to the Batdavaa family in their efforts to secure permits to remain in Poland.

A petition has been gathered on behalf of the Batdavaas, who have lived in Poland since 2000 and are well known among residents of Krakow’s Nowa Huta district.

Tumen Tegshjargal, Second Secretary of the Mongolian Embassy in Warsaw, told the Krakow Post: “We are glad that the Batdavaa family case has been resolved in a positive way for the family. We are thankful for the support of all the Polish citizens who were involved in this issue.”

Supporters of the Batdavaa family will gather at 6 pm on 10 February in Krakow’s Pub Kazamaty for a “Concert for Khash,” to be performed by a variety of local musicians.