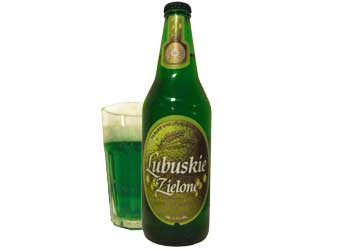 Yes, it is green. No, I don’t know why. The Beer of the Month jury were so astonished by this fact that it took us a good quarter of an hour to realise that Lubuskie Zielone is also highly drinkable. Is it the greatest beer in Poland? Probably not, but it is, and I can’t stress this too much, virulently and unapologetically Hulk green.

The greatest thing about this beer’s colour is that it doesn’t in any way warn you or shout about it. It’s like walking around wearing a pure white top hat and never saying “Hey, what do you think of the hat?” Admittedly it does call itself green (zielone) beer, but a lot of beers include some vaguely metaphorical colour designator in their names. You don’t open a bottle of Czerwony Smok and expect an actual red dragon to crawl out.

Perhaps the most telling detail about Lubuskie Zielone is that it comes in a green bottle. If Browar Witnica had decided to package it in a clear bottle, people all across Poland would point and say “Oh look, a green beer! I think I’ll try that.” But no, the Witnica people don’t roll that way. They put it in a green bottle, so it doesn’t look green, and are content to astonish the hell out of the kind of people who systematically work their way from left to right through the random selection in their local.

Interestingly, we later tried a honey beer from the same brewery that didn’t taste anything like honey. I don’t know what’s going on up there in Witnica but they appear to have created the Willy Wonka’s Chocolate Factory of breweries. Presumably, somewhere in the Browar Witnica research labs are prototypes for a beer that flows uphill and another that gets the person next to you drunk. I’m buying a train ticket right now.