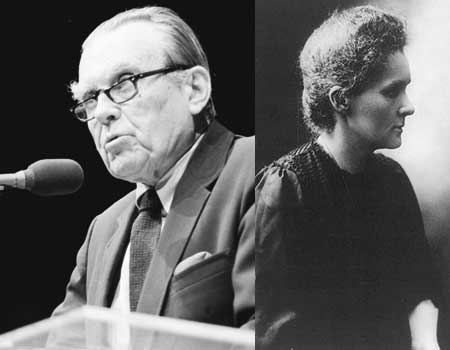 She was a two-time Nobel Prize winner and one of Time magazine’s most influential women of the 20th century. Her pioneering work led to the first use of X-rays and a tentative understanding of cancers. He was a man of letters—a poet, novelist, essayist and also a Nobel laureate, whose greatest work exposed the fragility of the human intellect beside the allure of totalitarianism.

In Krakow and across Poland this year, these two giants of Polish intellectualism will be feted and honoured, as the nation celebrates the achievements of Maria Curie-Skłodowska and Czesław Miłosz.

A century ago, in 1911, Warsaw-born Curie-Skłodowska was awarded the Nobel Prize in Chemistry in recognition of her work in the field of radioactivity. She had already received one Nobel Prize–for physics, in 1903, which she shared with her husband-to-be Pierre Curie for their research into Henri Becquerel’s new discovery–radiation; no other woman has ever won the prize in two separate fields. In the same year, on the last day of June, Miłosz was born, in Šeteniai, Lithuania (then part of the Russian Empire).

Poland’s parliament resolved that 2011 would be the year of Maria Curie-Skłodowska in the autumn of 2010. Members of the Sejm voted in favour of the resolution that called her “one of the most outstanding scientists of our time.” In declaring 2011 to be the year of Czesław Miłosz too, the Sejm was unanimous. Such was his global popularity the anniversary of his birth will also be celebrated in the United States, China, India and Israel.

Maria Curie-Skłodowska’s achievements are among the greatest in the history of science. She was the first to establish a theory of radioactivity, learned how to isolate isotopes and discovered two new elements–polonium and radium. She directed the earliest treatments of cancer using the knowledge she had given the world, and brought mobile X-ray machines to the front lines during World War I. She died in France, on July 4 1934, aged 66–from a condition that was almost certainly caused by her frequent exposure to radiation. Some of her papers remain too radioactive to handle safely.

The works of Czesław Miłosz have been translated into many languages and are known throughout the world. His most famous book outside Poland is The Captive Mind (1953), a series of essays about the fate of intellectualism, free thought and creativity in a totalitarian state. He wrote the collection in Paris in the 1950s, when Stalinism was at its height; the book was quickly banned in Poland.

In Poland, there is barely an adult who does not know of Miłosz. He wrote around 20 collections of poetry, and 25 prose collections, and translated many works including extracts from the Bible–often purely for the intellectual exercise these activities offered. His final work, Wiersie Ostatnie (Last Poems), was published posthumously in Krakow, in 2006.

Although Curie-Skłodowska and Miłosz are indisputably ‘Polish’ heroes, both spent much of their lives away from their native land.

Maria Curie-Skłodowska never questioned her nationality. She was Polish, despite spending much of her professional life in France, and regardless of the fact that she was born in the Russian Empire (at the time Poland had not existed as a political entity since 1795). Poland ran in her blood, as evidenced by her family’s fall to near-poverty because of their support for failed uprisings against Russia over the course of more than a century.

Although she couldn’t pursue her studies in her homeland (she studied at the Sorbonne in Paris because the Jagiellonian University in Krakow refused her entry on the grounds that she was a woman), she kept ties alive. This brilliant scientist, whom most of the world remembers only by her married, French, name, ensured her children learned Polish by employing Polish-speaking nannies. According to her biographer Barbara Goldsmith, Curie-Skłodowska made time to take her children on trips to Poland, to ensure they would not forget their roots. The first element she discovered, polonium, she named after her country. An article in the Polish journal Chemical Industry (Przemysł Chemiczny, 1998), suggests that she did this in order to make a political statement, using her discovery as a tool to draw attention to the subjugation of Poland.

The national identity of Czesław Miłosz is much less straightforward. Although he lived long after Poland had regained independence, for most of his life he saw the nation as under repression–first from Nazi Germany, later from Stalinist Russia. In fact he was, some might say, deliberately obtuse about his heritage–claiming to be a Polish poet through language, and a Lithuanian through birth. He later defected to France, before emigrating to the US in 1960. Yet he also claimed, in the introduction to The Captive Mind, that “It was in my country [Poland] that the second world war began,” and it was in Krakow that he chose to make his final home, dying at his apartment here in 2004.

Science in the city
This year, Krakow’s usual mix of tourists, students, ex-pats and locals will be spiced with scientists. The French-Polish Catalytic Symposium hold their meeting in the city in late January and early February. Honouring Curie-Skłodowska’s success in traditionally male roles, female scientists in Krakow can take part in an international congregation on 18 January–called Women Sharing a Chemical Moment in Time. Breakfasts will be held across the world, with Internet video links connecting them, as a precursor to the launch of the International Year of Chemistry in Paris on 27 January. Krakow’s event has been organised by Małgorzata Witko, of the Institute of Nuclear Physics at the Polish Academy of Sciences in Krakow.

Members of the International Congress of Radiation Research will converge on Krakow too, where they will hold a conference called Science as a Public Duty–Following the Ideas and Work of Maria Skłodowska-Curie, in early September. This event has been organised by Professors Kalina Kawecka-Jaszcz and Paweł Olko of the Polish Radiation Research Society (PRRS).

In fact, the PRRS has been instrumental in organising this year’s anniversary events–although the main activities and events will take place in Warsaw, Curie-Skłodowska’s birthplace and home of the PRRS. The society also, tri-annually since 1983, awards the Maria Curie-Skłodowska medal to outstanding scientists in the fields of radiation and radiation protection.

Miłosz in Krakow
Visiting Czesław Miłosz at his Krakow apartment shortly before his death, fellow Nobel Prize-winner Seamus Heaney compared the nonagenarian poet to the mythical character Oedipus. Heaney wrote that, as Oedipus spent his final days at Colonus, Miłosz had found a place that was “not his birthplace but… where he had come home to himself, to the world, and to the otherworld.” In a frank yet moving piece celebrating Miłosz’s life, Heaney began: “For quite a while now, those who knew Czesław Miłosz couldn’t help wondering what it was going to be like when he was gone.”

After his death, at the age of 93, the New York Times described him as “an artist of extraordinary intellectual energy,” while the International Herald Tribune reported that the poet was “celebrated with a state funeral, and ceremonies that lasted into the night.”

Doubtless, Poland as a whole and Krakow in particular loved Miłosz and mourned his passing. His tomb at the Skałka church is still a point of pilgrimage for many. And it’s little wonder, as Miłosz, in co-operation with fellow Nobel laureate Wisława Szymborska, brought a new kind of literary festival to the city when they organised the first Meeting of Poets from East and West in 1997. After Miłosz’s death the meetings continued, and now Krakow is set to spend almost two million złoty celebrating his life.

Much of the money has come from a national fund set up to mark the anniversary, with just over a million złoty going to this year’s Czesław Miłosz Literary Festival. For a week in May this year, Krakow will be home to conferences, workshops, readings and discussions, celebrating poetry in particular and Miłosz in general.

Although the festival will be the centrepiece of Kraków’s Miłosz celebrations, he will be remembered throughout the year with a series of events and installations in much the same way that Chopin was in 2010. There will be art installations around the city, and a series of concerts based on new compositions inspired by Miłosz’s poetry. The website www.milosz365.eu lists daily events.

Their lives at a glance:

One thought on “The Year of Curie and Miłosz”