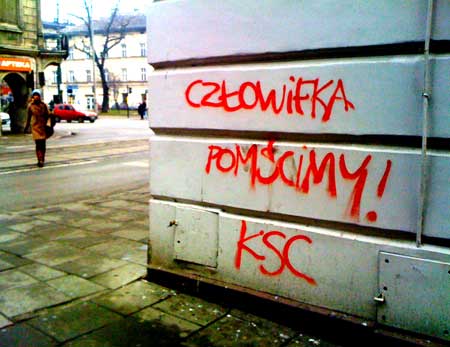 Krakow police are now holding five persons of interest in relation to Monday’s brutal killing of leading Cracovia football supporter Tomasz C., nicknamed ‘Człowiek.’ Reports indicate that one of those held is Paweł M., also known as ‘Misiek’ or ‘Little Bear,’ regarded as the head of the Wisła Kraków ‘Ultras.’ The two clubs’ unofficial supporters’ organisations are engaged in a bitter rivalry that extends back generations, and which has escalated in recent years.

Details have emerged concerning the killing, which was witnessed by horrified passers-by just before 10 am Monday, 17 January, and contradictory theories concerning motive have also formed among commentators and the press.

The victim was driving through a Kurdwanów neighbourhood when his Audi was apparently deliberately rear-ended by a Jeep. Człowiek attempted to speed away from his assailants, but lost control of his vehicle and crashed into a pastry shop. He then tried to flee on foot, but the street was reported to be “teeming” with masked attackers wielding clubs and machetes. Człowiek sought shelter by crawling into a rubbish container, but was pulled out and ruthlessly assaulted by the gang, who also beat bystanders. Tomasz C. died from multiple wounds in an ambulance on the way to hospital.

Człowiek rose to the head of the Cracovia hooligan community during the interregnum that resulted from the imprisonment of the firm’s top man, Robert M., known as ‘Metal.’ Człowiek was reportedly well liked in the club, and ran a kickboxing school while serving as a major figure in Cracovia’s feared hooligan firm.

Theories being pursued by police indicate that the murder may have been related to Człowiek‘s alleged involvement in the distribution of illegal narcotics rather than his club loyalties. The arrest of the top Wisła figure, Paweł M., however, suggests that the street-fighting football firms may also be involved in drug dealing. The Wisła leader became notorious in 1998 when he hurled a knife from the crowd during a EUFA Cup match against AC Parma, hitting Italian defender Dino Baggio in the head. The incident resulted in Wisła being banned from European play for a year. Paweł M. is also believed to be the owner of the Jeep involved in Monday’s killing.

Another theory holds that Człowiek was hunted down by Wisła supporters seeking revenge for an incident in London in which he is believed to have injured a Wisła supporter’s sister with a knife in a fight that was purely club-related.

Monday’s attack has come at a time of already increased tension between the two clubs’ supporters, evidenced by an outbreak of aggressive graffiti across the city, and insiders have reported a heated atmosphere. Scarlet pro-Craovia graffiti vowing revenge for the attack appeared around the city on Tuesday.

A gathering of Cracovia supporters is expected to be held this evening, 19 January, as a part of a so-called “War Expedition.” Some student organizations have advised young people to stay indoors tonight.