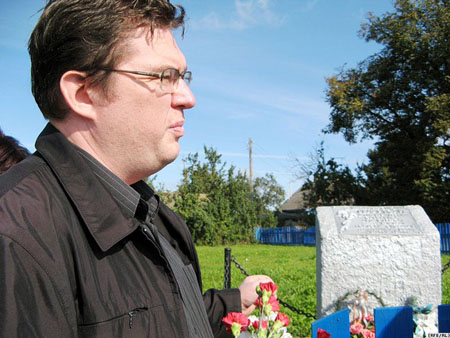 Andrzej Poczobut, the Belarus correspondent for Polish newspaper Gazeta Wyborcza was interrogated last Saturday by KGB officers in the town of Grodno, 300 km west of Minsk on the border with Poland.

Ethnic Poles make up almost one quarter of the city’s population of around 330,000. A Polish minority became established in Belarus in the 1920s before the seizure of the territory by the Soviet Union in 1945.

Apart from being the nerve centre of the Union of Poles in Belarus (UPB), declared illegal by the Lukaszenko regime, Grodno is a hub for local correspondents and stringers reporting from Belarus.

“Pressure on journalists in smaller towns can be even greater than in the capital,” Poczobut told the Krakow Post. He is a prominent member of the UMP branch banned by Minsk desk officials in 2005.

“My life has been dominated by fear in the last years, but I still keep on doing my job—thanks to the solidarity expressed by others journalists and Belarusian citizens,” says Poczobut, who has had his press pass renewal application refused since February 2010.

On 8 January Poczobut was detained for almost three hours in KGB headquarters and claims to have been struck by a pair of agents who urged him to sign a paper in Russian endorsed by General Korzh, the chief of the KGB for the Grodno region.

“I added ‘Nie zgadzam się’ to my signature, which means ‘I do not agree’ in Polish,” he points out. Before countersigning the document, Poczobut asked for a copy and later published it on his blog and then in Gazeta Wyborcza.

“The regime has not stopped orchestrating its traditional post-electoral witch-hunt,” says Andrzej Pisalnik, the Belarusian correspondent for Polish daily Rzeczpospolita. Pisalnik spent 17 days under arrest during the fraught Belarusian elections of 2006.

On 6 January 2011 the KGB interrogated journalist Viktoryya Kolchyna and searched the home of Ales Barazenka. Both journalists work with the opposition Polish-based satellite channel Belsat, which is financed by Polish state television.

Kolchyna is currently working on a documentary about Aleh Byabenin, a Belarusian journalist and founder of the opposition website charter97.org who was found hanged in his lodge near Minsk on 3 September 2010.

Since the nightmare-before-Christmas re-election of Lukaszenko as the head of the Belarussian state, several prominent activists and even defeated presidential candidates have been interrogated and detained by the KGB.