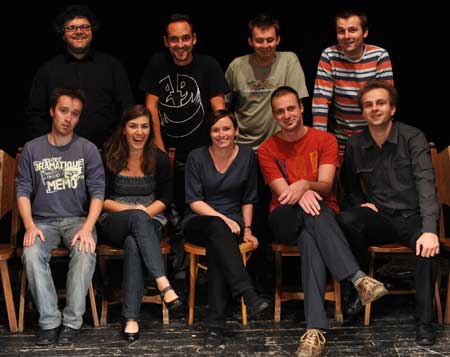 Poland has a long and raucous comedy tradition. Five hundred years ago the near-legendary jester Stańczyk was known as the funniest, and wisest, man at the royal court. Stańczyk was famed for his satirical comments, and satire aimed at the great and the good has remained a defining element of Polish humour. Stańczyk appears as a ghost in Stanisław Wyspiański’s hugely influential and subtly satirical 1901 play Wesele (The Wedding), which was written just before the birth of the Polish kabaret scene.

Kabaret has come to mean something different than the closest English equivalent word ‘cabaret’ suggests. A Polish kabaret is closer to a sketch group than the mix of comedy, and glamorous song and dance that the word suggests to an English speaker. Polish kabarets have been the mainstay of Polish comedy since the first decade of the 20th century and through the un-funniest years of partition, war and occupation. Now that these evils are behind us, Poland’s performers are absorbing influences from the wider world of comedy and forging something new.

Stand-up comedy has been a staple of the Western comedy scene for decades, but the form was almost unknown in Poland until very recently. Humorous routines performed by individuals are not new to Polish comedy, but they have traditionally been monologues in which the performer plays a comedic role. In stand up, by contrast, the comic speaks to the audience as him or herself. Western comedy fans are very familiar with the style—the rambling surrealism of Eddie Izzard or the dark vigour of Bill Hicks—but to see the comic stepping out from behind a sketch persona is a new experience for Polish audiences.

The stand up tradition of uncompromisingly adult language and a willingness to make light of the taboo is another novelty for Polish audiences. Polish comedy has always revelled in satire, but it steered clear of calling politicians rude names. Censorship and the very real perils of ending up in an SB cell were compelling forces. The new wave of Polish stand ups do not have such worries. Many of them are enthralled by tales of legends such as US stand ups Lenny Bruce and Richard Pryor, who used ribald language to lampoon injustices. Young Polish comedians see this as a way of shaking up social attitudes in their own culture. Sex, the church and the private lives of the great and the good have become legitimate targets.

In 2010 stand-up comic Kacper Rucinski took third place in the popular and highly respected PAKA cabaret competition, which takes place annually at Krakow’s Rotunda Theatre. It was an early sign of the growing popularity of the form. Rucinski and a handful of other stand ups, such as Abelard Giza, Aldona Jankowska and Katarzyna Piasecka, can now draw devoted audiences of students and the urban hip across the country. More recently Polish national broadcaster Polsat held a televised stand-up contest that introduced the idea to a mass audience. The response was interesting. Established Polish stand ups lost out in the audience votes to amateurs who relied more on the traditional Polish comedy tropes of absurd characters and outlandish costumes. Stand up may be a growing force, but the old familiar ways dominate for now.

Improvisation is the second imported trend injecting new laughs into Polish comedy. Several improvisation groups have sprung up across the county in the past couple of years. Improv has long been closely related to stand up, so it is unsurprising that both forms should arrive hand-in-hand on the Polish scene. Many of the current generation of Western stand ups got their start in London and New York’s improvisation clubs in the 1980s and 90s. Poland’s young improv groups take their inspiration from the classic UK and US television show Whose Line Is It Anyway? which has a cult following here.

Grupa Ad Hoc
Formed in 2008, Grupa Ad Hoc is Krakow’s representative in the burgeoning improvisation scene. Ad Hoc’s members include performers from several established and infamous kabarets including Kabaret PUK, Kabaret Róbmy Swoje and Kabaret UCHO. Ad Hoc perform at numerous local and national venues and have taken part in several comedy festivals and competitions. In Krakow they are often to be found doing their thing at Śródmiejski Ośrodek Kultury (ul. Mikołajska 2). Ad Hoc are also the leading force in a series of performances at Rotunda intriguingly titled Scena Eksperymentalna (Stage Experiments). Their next performance is on January 19th at Rotunda.

Aldona Jankowska
Born in Poznan, but a long-time resident of Krakow, Aldona Jankowska is a leading figure in the brave new world of Polish stand up. Familiar to many from her regular appearances on TVN’s Simon Majewski Show, Jankowska already had a long a successful career in kabaret, theatre and film before branching into stand up. She has toured nationally with one-woman shows titled Pink Horses and If Not Me Then Who?—both featuring elements of stand up.