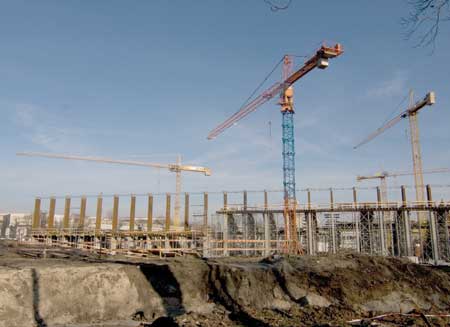 Jacek Majchrowski has been sworn in for a third term as Krakow mayor after defeating Małopolska voivode (governor) Stanisław Kracik in December 2010 elections. The mayor asked for the cooperation of everybody for whom “regardless of personal views, the wealth of Krakow is important.” Majchrowski, who took part in the election as an independent candidate, polled 59.53 percent of the vote in a second-round showdown with his main rival Civic Platform (PO) candidate Stanisław Kracik.

Majchrowski’s two previous terms in office saw their share of both success and controversy. During his first term he brought budget airlines to Krakow—a decision that aided the rapid growth of tourist numbers to the current eight million annually and encouraged the development of the city’s airport. The modernization of the Wisła and Cracovia football stadiums was also begun during Majchrowski’s first term, the Płaszów II sewage treatment plant was completed and the ‘Water for Everyone’ programme implemented. The Market Square and ul. Florianska were repaved and renovation works around the Planty were finished.

On a less positive note, the mayor’s opponents reproached him for failing to realize the plan to build an express tramline and subterranean parking in the Old Town area. The decision to build underground tourist facilities in the Market Square was also unpopular, though the now-opened underground museum has proved a big hit with visitors.

During his second term, Majchrowski succeeded in pushing through the majority of projects planned or begun in his first. Both the Mały Rynek and Plac Wszystkich Świętych were modernized and a new department of the Historical Museum of Krakow was opened, as was Cracovia’s completed Józef Piłsudski Stadium, the capacity of which was increased by 15,000. The second section of the express tramline was finished and the Grzegórzeckie and Mogilskie roundabouts were dramatically improved.

Among second-term disappointments were the failure to build a tramline to Ruczaj and the new UJ campus or the planned sports hall in Czyżyny and the Congressional Centre near the Grunwaldzkie roundabout. Some opponents of the mayor accused him of poor supervision over the repeatedly delayed Henryk Reyman Stadium, home to TS Wisła Kraków, resulting in a massive overspend and poor design.

What will Majchrowski’s third term bring? The mayor has stated his intention to finish what he has started. As well as his own plans he has pledged to include some ideas put forward by his opponents in the election campaign. He announced annual reporting to the electorate on the progress of his policies and wants to introduce regular public consultations on important issues. Majchrowski has also promised to improve the regional standing of Krakow in cooperation with the government of the Małopolskie voivodeship and other city governments in the region.

The election in Krakow was part of a nationwide poll for city governments. It was notable how well incumbent mayors, such as Majchrowski, did. In Poland’s 14 largest cities only one mayor, in Bydgoszcz, failed to get re-elected. Independent candidates and those on the Civic Platform (PO) ticket shared the power by half. Turnout in 2010 was much lower in second-round contests than in first-round polls; in Krakow only 33.56 percent of eligible voters braved the frosts to make it to polling stations.