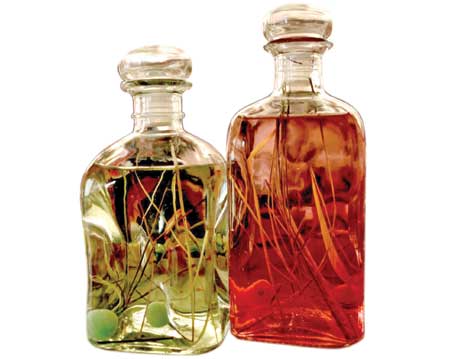 There’s a sure fire way to keep the cold winter at bay, and not surprisingly it has been perfected by many Poles. All over Poland, treasured bottles of nalewki (matured fruit liqueurs) are emerging from cellars and dark cupboards, where they have been patiently macerating since the warmer months, and being offered to unsuspecting visitors as well as the unwell.

Made on a base of spirytus (a 90% alcohol that can also be used to clean paint brushes and remove nail polish) diluted with vodka, there are as many recipes as there are people who make them. Many of these recipes are jealously guarded secrets and their subtleties appreciated by legions of amateur experts or judges in numerous competitions held all over Poland.

With a couple of exceptions, there’s a world of difference between the nalewki available commercially and what is produced by keen amateurs at home. Making nalewki is time consuming and usually done in two stages. In the first, the fruit is covered with alcohol and allowed to macerate for up to 10 weeks. Then the fruit-flavoured alcohol is strained off and sugar added, or alternatively, the drained fruit is covered with sugar to extract the remainder of the juices and make a fruit flavoured syrup which is eventually added back to the reserved alcohol. The raw infusion is then poured into bottles and left to mature for at least six months, ideally longer.

My neighbour, a patient, even tempered and diligent engineer with a passion for making nalewki, has a collection of several dozen bottles in his cellar, each of which is a subtle variation on a couple of recipes he has developed in a never ending quest for perfection. He spends the summer collecting empty vodka bottles after weddings (he insists that these give the best results) and waiting until the fruit is ideally ripe before embarking on a series of nalewki-making sessions that last until late September. He usually makes a few bottles of porterówka from porter beer, which tastes like concentrated Guinness. After Christmas, he gets together with friends for a competitive tasting session of the previous year’s production. It’s pretty civilised.

Since the middle of the 15th century, nalewki were traditionally served in Poland as an accompaniment to spicy or savoury food, particularly meats, but they have also been used medicinally since the times of Hippocrates, who mixed cinnamon and fermented honey to make Hippocras. Over time, nalewki became essential elements in the healer’s tool box.

Luckily for those who have neither the space, talent nor inclination to make their own, there are a couple of producers who make the real thing commercially. The easiest to find are Nalewki Staropolskie, made by Karol Majewski near Warsaw. Karol gave up a career as a music journalist in 2004 to make his long-standing hobby into a family business. Every year they make small batches of nalewki by hand, using their fruit from their own orchards or from small growers who they’ve been cooperating with for years. Try their Poranna Rosa nalewka, made from an old, and now rare, variety of raspberries.