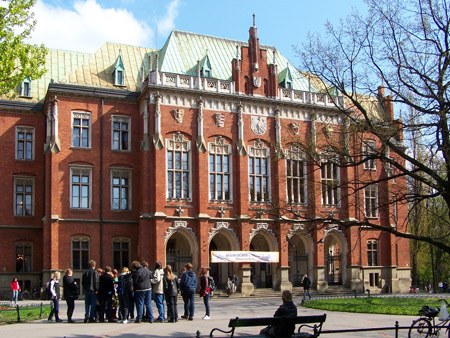 The Jagiellonian University is one of several in Poland to provide food, accommodation and study opportunities for the students.

They were expelled from their universities in Belarus because they participated in “demonstrations against the government” according to the Belarusian Ministry of Education.

Barbara Kudritska, Poland’s Minister of Science and Higher Education, wrote to the UJ among others requesting their help on behalf of the students.

She wrote: “In the light of the actions of the authorities of Belarus consisting of infringement of basic civil rights and freedoms, and in view of prosecutions of scientists and students, I call upon the Polish universities for whom freedom is of supreme value to show academic solidarity.”

A spokeswoman for the UJ confirmed that students from Belarus were being welcomed at the university, as they had been in similar circumstances following the 2006 election.

She told the Krakow Post: “The Jagiellonian University is accepting students from Belarus, as it did after the previous election. More than a dozen students have arrived at the university and we are ready to provide them with meals and accommodation in the dormitories.”

Poland has also agreed to waive the visa fee for Belarus nationals, beginning this month, but has banned anyone suspected of being involved with election rigging from entering the country.

Around 10,000 people joined protests in Minsk after Alexander Lukashenko was re-elected to the office of president on 19 December. Lukashenko won 80 percent of votes cast according to official sources, but Poland’s Foreign Minister Radosław Sikorski joined international condemnation of the election as a sham.

Images from the demonstration show armoured police chasing protesters and beating them with truncheons. Other pictures show protesters, some bleeding heavily, being carried away by friends. At least 600 people were arrested on the day. Many were later released but the KGB-Belarus’ special security service-have since arrested many journalists and opposition leaders accused of organising the protest.

Vladimir Dounaev, writing in Peace Review: A Journal of Social Justice, described the difficulties facing students in Belarus every day.

He wrote: “Universities are used as an instrument of political control for harassing students and teachers, prohibiting opposition opinions and actions, and controlling voting results by compelling students in dormitories to vote early and participating in forging vote results (university administrations set up counting committees in dormitories and hold responsibility for the election results up to the dismissal of rectors and department heads in case the authorities find the results unsatisfactory). University administration prohibits participation in unauthorized actions and meetings, cultural and professional events, and reports on the participants to the police and KGB.”