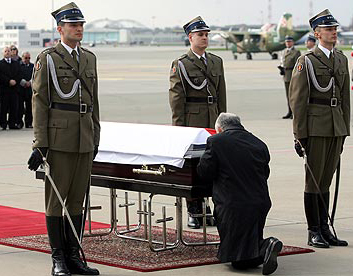 Jarosław Kaczyński, head of the opposition Law and Justice (PiS) party and twin of the late President Lech Kaczyński, who died in a plane crash on 10 April, has raised doubts about the identity of the remains in the tomb bearing his brother’s name.

At a press conference in Warsaw, Monday, the former prime minister told journalists that he was sure he had recognised his brother’s body when asked to identify it in Smolensk immediately after the crash, but that he did not recognise the remains returned to Poland a few days later. “Here was a man who did not resemble my brother at all. I was told that it was him,” he said of the body returned to Poland, adding: “The president of Poland was certainly not a general and did not wear a general’s uniform.”

The startling revelation comes a few days after grisly reports on national radio station RMF FM that not all the remains in the tomb belong to the late president and his wife. These reports called into question the reliability of Russian autopsy procedures.

Last Friday Prime Minister Donald Tusk rejected the draft Russian report on the Smolensk air crash that killed the former Polish president calling it “unacceptable” and not in full compliance with the Convention on International Civil Aviation. No mention was made of misidentified remains.

The decision to inter the bodies of the late president and his wife in a crypt beneath Krakow’s Wawel Cathedral caused great controversy in Poland. Some Poles felt that Kaczyński did not deserve to be placed alongside Polish kings and national heroes. Suggestions that the remains in Lech Kaczyński’s tomb should now be exhumed and examined are likely to be highly divisive.