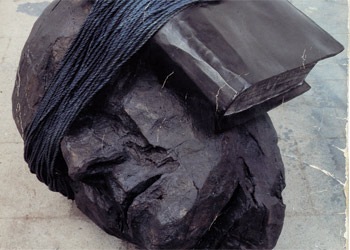 The censor is always with you.

The censor is always there, though generally he prefers to keep a low profile. The censor’s element is the shadowy corner, the bunker with doors bolted from the inside, the veiled reference. This is why it is all the more astonishing to find an edition such as my 1984 copy of Jerzy Stempowski’s Essays, wherein the brazen censor actually announces his cuts, such as the following interjection, when the author is cut short in his musings on Thucydides and Ancient Greece: “The present reader has an easier time understanding the position of the smaller republics. [—-] (Regulation of 31 July, 1981 on the monitoring of publications and spectacles, art. 2, pt. 3).” Oddly, some of the menace is lifted here, with this strategy. Censorship is less sinister, even turns comical, when you know what you’re missing, when you can track the logic or the patent illogic of the censor.

Though most perhaps still think of censorship in its “classic” mode of expression (a humourless man in a stuffy office with a black marker) and particularly from the years 1945-1989 (in the Polish case), Polish censorship actually goes back much further, and takes on multiple and stimulatingly varied forms, of which perhaps the most curious is self-censorship.

A rather obscure, but telling example from the prehistory of Polish censorship comes in a novella by 19th-century oddball Ludwik Sztyrmer, entitled Black Eyes (1844), which features a quote from Adam Mickiewicz’s Forefather’s Eve. The quote is supplied only with the letter M for identification – the name Mickiewicz was considered too controversial and incendiary to appear in print. That letter M could hardly have left any reader in doubt, of course, and so here we have another peculiar example of the censor both allowing a text and not allowing it. Above all he is marking his presence – letting you know what he won’t let you know.

Forefather’s Eve, of course, continued to be a highly controversial and frequently banned text for over a century thereafter, with its themes of resurrection, glorification of the Polish Romantic spirit, and its eloquent incitement to throw off the shackles of oppression. In 1968, for example, a performance of the play caused such a ruckus that it had to be yanked from the repertoire, spurring student riots and violent unrest in general.

The aforementioned Sztyrmer, incidentally, goes down in Polish and perhaps world literary history as one of the precious few male writers to withhold his identity and replace it with a female nom de plume, fearing that writing tales of demonic possession and enchanted paintings did not befit a man of his military profession. As such, he became one of a long line of Polish self-censors, of whom perhaps the most enthusiastic and methodical was Aleksander Wat. In the 1950s and 1960s Wat believed himself the victim of a horrible, incapacitating disease (which some have suggested was purely psychosomatic), had spent many years in exile and in a string of Soviet prisons, and then, upon his return to Poland, in hospital death wards. These experiences left him lucid but deeply paranoid, and his Diary Without Vowels stands as one of the most remarkable manifestations of this brand of mania in existence. As the title suggests, Wat censored every vowel from the pages of his diaries, perhaps to keep them from being read as evidence against him. He left his long-suffering wife, Ola, to piece together the contents after his death. Here is Ola on his possible motivation: “Vowels are light, breath, the life of the word, its pulse. Thus the pages that were filled with shards of consonants could only testify to his suffering. The words were ragged, rough, and crushed; a symbolic, very concrete expression of his state at the time.”

Self-censorship as a mode of expression – and particularly, as an expression of suffering or of dissent – that required viewers to develop a hyperactive sense of “reading between the lines” was to become, of course, a Polish speciality. In the Polish art of the 1950s-1970s, everything seems to be really saying whatever it’s not in fact saying. It was this urge, no doubt, that led Polish artists to literally reinvent the “mental shortcut” in the body of work that has become known as the Polish Poster School. The literary analogue was a writer like Sławomir Mrożek, often reductively understood in the West as a kind of “Aesop for our times.” Mrożek’s preoccupation seems to have been making caricatures so outlandish and grotesque that they transcended the locally political and became little dreary parables of a dreary existence – though no less humorous for all their dreariness. What was the poor censor to make, for example, of a play like Out to Sea, wherein three castaways on a raft – a fat man, a medium-sized man and a skinny man – hold an absurd political debate to determine which one ought to be eaten by the other two? Martin Esslin (inventor of the increasingly criticised notion of the Theatre of the Absurd) saw Mrożek’s theatrical masterwork, Tango, as an elaborate commentary on Stalinism – and who can say, perhaps audiences in 1964 who were hungry for such contraband watched it this way as well – but in the sobering light of the 21st century, a reader will probably first notice its dazzling philosophical play on the substance and structures of theatre as such.

Under Gierek’s leadership (1970 -1980) , there were new cultural policies that were designed to look like improvements, but in fact made it no easier for a writer to voice his or her opinion. Strangely enough, it wasn’t even so easy to get officially blacklisted. Public blacklisting became a perverse kind of privilege, if only because it was a backwards form of presence in the public eye. The names of writers that were true enemies of the state (these included Jerzy Andrzejewski, Zbigniew Herbert, Jerzy Ficowski, and Stanisław Barańczak) were not even to be mentioned in the context of their condemnation. A second group of writers (including philosophers Leszek Kołakowski and Krzysztof Pomian) was not to be given “positive exposure”, though brief information could be supplied on their work if it was critical in nature. Then there was a third group (including Henryk Grynberg, Jan Kott, and Leopold Tyrmand) whose names and works could be mentioned only in scholarly publications, and only en passant. The fourth major group was made of chiefly émigrés (Czesław Miłosz and Marek Hłasko are included here), whose existence could not be entirely negated due to their fame abroad. These figures were “tolerated” in the official press, but each mention of their names had to be prefaced with a note about their political incorrectness.

The censor is always with you. But it remains to suggest that perhaps the most powerful censor, the censor one is least likely to master, is one’s own conscience, particularly if that conscience is rotting from the inside. Though German Fascist cruelty was one theme that the Soviet censors greeted with open arms, Polish literature from the 1950s-1970s is depressingly silent on the so-called “Jewish question”, as it is on the occasional pogroms that broke out after the war, as it is on the events of 1968. This absence is all the more astonishing given that so many of the great names in Polish literature before World War Two (Bolesław Leśmian, Julian Tuwim, Aleksander Wat, Bruno Jasieński, Bruno Schulz, and so on, and so on…) were Jewish, that here, out of all of the fields of culture, the loss was the most devastating.

In theatre there were attempts, in the 1960s in particular. Józef Szajna’s Puste pole (Empty Fields) of 1965 was a grotesque examination of the ramifications of turning a concentration camp into a museum, and Jerzy Grotowski staged a production of Hamlet (also in the mid-60s) in which the Prince of Denmark was a Jew, and his court a bunch of loutish Polish partisans. The latter spent the duration of the play kicking and spitting on the Jew. Neither of these productions had the kind of resonance, however, that could bring about a real public reckoning with the past.

Writing a foreword to the American edition of Abram Tertz’s The Trial Begins, Czesław Miłosz (author of the Western world’s “key” to the Polish intellectual’s experience of communism, The Captive Mind) commented on the American view of Soviet literary censorship. In essence, he said that Americans were absolutely right in thinking that the American government would never censor books as the Soviet Union did, because books did not have the cultural currency, the social impact that they did in the East. The American government would be wasting their time by scrutinizing the contents of novels. We must, alas, be inclined to agree – it suffices to consider all the things that could not be shown in films or on television during the same period, the moral strictures imposed, or the record-burning hysteria surrounding rock ‘n’ roll albums and Elvis’s hip-wiggling. Subversion is never greeted with a warm handshake, not in any country, and it is unlikely our times are any better – though they are certainly more apathetic.