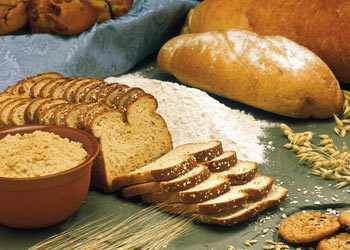 This month’s column is dedicated to bread – a food that can be found in pretty much all cultures, one that has sustained countless generations and one that Poles have a pretty good track record of making. As a child, I could never understand why my parents scoured continental delis in 1970s London for dark, sour bread when all I wanted was the white, fluffy stuff, but since then I’ve come round to the pleasure of a real, unhurried and unmessed-about-with loaf. As someone who balks at paying a premium for “real food” in places like London, I am happy that real bread is still an affordable staple here in Krakow.

Bread is an amazing product. In his On Food and Cooking, a bible for anyone interested in food history and science, Harold McGee says that bread “represents a truly remarkable discovery… For our prehistoric ancestors it would have been a startling sign of the natural world’s hidden potential for being transformed, and their own ability to shape natural materials to human desires.” To be honest, until I read that I hadn’t thought of my daily toast as a link back to our prehistoric ancestors, but it does make sense. At its most basic, bread is made from ground grains and water which are then cooked (or baked) to make flat breads. Think matzoh, chapattis and tortillas. But if you let the bread and water paste sit for a few days, it ferments and gives a bread with a completely different texture. You get the same nourishment, but more pleasure; an everyday necessity is transformed into something uplifting.

Since then, we’ve come a long way from the stone grinding of grain and natural fermentation. In the most developed countries, bread making has become industrialised and the time-consuming (and finicky) biological processes that were needed have been replaced with chemical and mechanical methods that give you a dough that’s ready to bake almost straight away. The resulting loaf is almost like a cake – doughy, with a soft crust and almost no flavour.

You can find this type of bread in Poland too, but as is often the case here, the lack of wholescale industrialisation means that there are still a good number of independent bakeries that make their own bread using traditional techniques and ingredients. These traditional bakers recognise that baking consistently good bread is a craft that can only be learned through experience and they take their art seriously. One of my favourites in Krakow is the Piekarnia Francuska (the French Bakery).

Set up by Antoni Madej in 1990, the Piekarnia Francuska initially specialised in producing typical French breads, baguettes and croissants. However, as their clients’ tastes changed, they started also using traditional Polish recipes. When Mr. Madej read about a particular type of bread made in the Prądnik district of Krakow in a poem dating from the 15th century, he was intrigued. The story goes that a local bishop granted his cook some land in exchange for providing him with bread (if only they made clients like that today…).

After five years of digging through the city’s archives and experimenting with recipes, Mr. Madej perfected the recipe for Chleb Prądnicki (Prądnicki Bread) a rye and wheat loaf that uses a soured rye leaven with the addition of boiled potatoes. It’s delicious, long-lasting and the flavour improves with age. It’s also huge: it comes in 4.5 kg loaves but is usually sold by the quarter at the bakery’s stalls in the Kleparz markets and their shops around the city. Determined to fly the flag for real Polish bread, Mr. Madej also took on the bureaucracy of Polish and EU agricultural policy to register Chleb Prądnicki as a traditional regional product almost three years ago, and will soon be awarded PGI status by the EU, alongside products like Gruyere, Traditional Cumberland Sausage and Cornish Pasties.

Coming a close second is the Piekarnia Mojego Taty (My Father’s Bakery) on ul. Meiselsa in Kazimierz, whose long opening hours (6 am to 2 am) make it an essential stop on the way home after a night out. It’s the brainchild of Wojtek Smętek, the son of a professional baker, who left his career in marketing and distribution when he realised that he wasn’t the only person longing for the taste of the types of bread his father had produced. He found the premises on ul. Meiselsa where a huge, four metre high oven had been in continuous use since 1914, but says that finding bakers who knew how to make bread properly, without the use of artificial improvers, strengtheners and emulsifiers was the hardest part. Luckily, he managed it and these days, a wide variety of traditional breads and yeast pastries emerges from the old oven at all hours of the day and night.