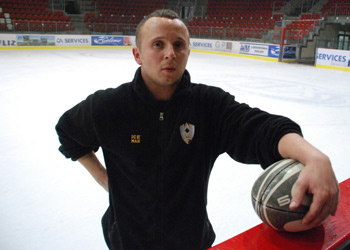 It’s a lucky man who can bring together two passions into a single undertaking that becomes his life’s work. Adam Gołąb is determined to do just that.

He is the progenitor and promoter of what is almost certainly the world’s only rugby on ice organisation. That’s right: rugby. Played on ice skates.

Improbable, you say? Insane? Impossible? Gołąb has heard it before. But that hasn’t stopped him from putting together what is probably the world’s first and only club to train potential players in a Frankenstein’s monster of a sport, marrying the speed and skill of ice hockey with the unique team dynamic of traditional rugby.

Gołąb spent his early childhood in Krakow’s Kazimierz district, where he learned to skate in elementary school classes held at the city’s only full-size ice rink. When his family moved out of the area when he was nine, he never gave up his passion for skating, regularly travelling several kilometres to speed around the rink.

“I’ve been skating for 23 years. It’s the kind of passion that you can’t just leave behind. I’m so into it that I don’t think anything could take its place.“

At age 17, he was to discover his second passion – the rough-and-tumble team action of rugby. He joined the Krakow rugby club, Juvenia, where he went on to play for 10 years before growing frustrated with the glacial pace of development of the sport in Poland. He then struck off on his own to return to ice skating, teaching lessons and tricks.

He formed the Krakowski Klub Freestyle’owy to share his passion for pushing the boundaries of what the human body can do on steel blades, much in the way that freestyle sports have sprung up over recent decades around bicycles, skateboards, and roller-blading.

Gołąb took the idea and ran with it. “There was a group of guys who skated hard, but nobody had thought of creating a group to do it. Now there are more and more groups like ours in Poland. In almost every city where there’s a rink a group is forming. People write to us from all over Poland.“

The fledgling sport is still in the development phase, as the participants continue to invent new ways to compete. It was during this experimentation that Gołąb came up with Rugby on Ice.

“The combination came together when four years ago we came up with the idea for a freestyle skating club. It’s not quite like ice hockey or figure skating. You do it on hockey skates, performing different acrobatics, sort of the way figure skating works.”

Always looking for new ways to play on the ice, one day Gołąb broke out his rugby ball and started teaching the guys to play by passing it back and forth. “We started playing and it was incredible. That was when it came to us that rugby on ice skates could be a truly amazing sport.”

At present, as the only club in existence, the players train on the smaller ice rink on ul. Eisenberga. In the absence of pads to protect players from suffering serious injury resulting from falls on the ice, they play a touch version of the game. Gołąb nevertheless speaks of his future plans a future full-contact version with all the fervour of a visionary. The group has been invited to demonstrate ice rugby in different cities, and Gołąb has no intention of slowing down.

“I want to show people that there is such a thing, and show the speed of the sport, the dynamic action, and that it’s possible to create a kind of action that can’t be organised on a grass pitch. Rugby on grass can never be as fast as rugby on ice. We can get going as fast as 50 kilometres an hour. Even hockey players don’t go as fast as we do with the ball, because they have to handle the puck with a stick. We play so fast you can’t even keep track of the ball.“

The experimentation didn’t stop at rugby. “We also played basketball, volleyball, and handball. With a little imagination there’s nothing you can’t do on skates.”

With his impressive skating skills and his open willingness to teach, Gołąb has put together a substantial following made up of both men and women across a broad range of ages. The club now counts over 100 members. “We have kids as young as 10 and one guy who’s 70 now,“ says Gołąb. “Of course, they don’t all come to play rugby.

A member of the club in her fifties told the Post, “I just started learning to skate three years ago, and I think it’s fair to say that I’ve learned a lot from the club. I don’t think I’ll be playing rugby, though.“

Gołąb has a few hurdles to cross before his dream of a pro ice rugby league becomes a reality, not least of all financial ones, but he’s ready to tackle any problem with the tenacity one would expect from the world’s first ice rugby player.

For more information on ice rugby, check out www.isft.pl.