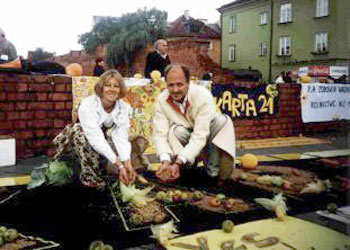 In October, the Krakow Post had an opportunity to talk to the founders of the International Coalition to Protect the Polish Countryside (ICPPC), Jadwiga Łopata and Sir Julian Rose (of the UK), about the prospects and impediments to small family organic farming in Poland.

Both Jadwiga and Julian have a long history of promoting ecotourism and ecological lifestyles. When Sir Julian Rose received his organic farming certification in 1975, he was only the seventh licensed organic farmer in the UK. Jadwiga Łopata’s long-time efforts were most notably recognized in 2002, when she won the Goldman Prize, which is the equivalent of the Nobel Prize for environmentalists.

This past weekend (November 20-22), the ICPPC celebrated its 10-year anniversary as an NGO organization working to protect the “wild nature, beautiful landscapes, well-preserved cultural traditions, and many good farmers who love their work” in the Polish countryside. The organisation is based at the Ekocentre ICPPC complex in Stryszów in the Małopolska region, where on two hectares of land, they have a small farm and a straw-bale building that runs off solar energy and a passive energy greenhouse in an effort to popularize such ecological technologies and lifestyles.

Krakow Post: What advice would you give to small family farmers in Poland?

Julian Rose: We need to think small scale, not be too ambitious about selling food on the global market, but rather as close as possible to the place where it was produced… so selling from a farm directly to the consumer, bypassing the middle man [ie. supermarkets].

Jadwiga Łopata: My advice to Polish farmers: just keep doing what you’re doing. Maybe it’s a difficult time, but with more and more people becoming aware and wanting quality food, we just have to be strong and keep going. We are telling them to protect their rights, their culture, and their tradition to be able to produce good food. All this is based on the wisdom of generations. The new regulations, the new ways of production have only been around 20-60 years maximum, while we are relying on wisdom from generations and generations. It is simply about protecting the people, their way of production, their rights, what they want to eat, and pass it on to their children afterwards.

KP: What kinds of mechanisms can help organic farming in Poland?

JŁ: Of course, community-supported agriculture (CSA) boxes and ecotourism are good, but they have to be a government policy to be able to work on a broader scale. We as an NGO can organise ourselves to a certain level and on a small scale. We’ve already proven this is working… its very economical, good for the environment, good for our culture. It just needs to be taken as a policy for government, and if government is not doing this, hopefully the masses will just take over. Regulations are currently supporting big enterprises and corporations, and we need to change this approach, to make regulations which will support small-scale family farming, which will benefit our society in these many aspects.

KP: What are the current impediments to selling local produce in town?

JR: The biggest impediment is that the world we live in is run by a supermarket, and people think it’s modern and clever and fashionable to buy the cheapest food available, no matter the quality or how far it travelled, or how little the farmer was paid who produced it. So our biggest problem is probably a lack of consumer awareness of how food is produced, how to eat it in its most optimal condition (meaning when it is fresh, and not the opposite, as in the supermarkets).

JŁ: What is on the plate determines the kind of agriculture… in this way, you could say we, as consumers, farm three times a day. We consumers have big power, if we decide we want to eat local quality food, this is what would be in the shops.

KP: What are the successes the ICPPC has achieved in Poland?

JR: We are currently engaged in a mighty battle to keep genetically modified organisms (GMO) out of Poland… we’ve spent most of the last six years actually trying to stop these genetic modifications from getting into Poland. The biggest success has been the way the local people have responded to our efforts, appealing to local authorities and regional authorities … eventually on a national level to create an awareness that led [then-President Lech] Kaczyński to actually ban GM food imports in Poland back in 2006. Of course, the situation is deteriorating again under the current government and they’re playing with the idea of opening Poland up again to commercial GMO production. So we are called on again to raise awareness, to stop it.

JŁ: To specify, the present government is working on a regulation called the GMO Act, to open Poland to commercial GMO planting. If such actions and appeals had not been taken, this legislation would have probably already passed. But so far, it’s still hanging on and not yet passed. It went to a reading before the Parliament and then to a public reading where 98 percent of the people there, including scientists, farmers, different enterprise representatives, spoke out against the regulation. So the government has hushed up… for now.

People are getting more aware and they show this by their activities. For example, the GMO-free picnic took place recently in 120 different sites all over Poland, organised by local people and local organisations, small and big, in cities and on farms, whether it was an actual picnic or a symbolic happening, thousands of people were involved. The same with the Feast for GMO-free Potatoes, which happened two weeks ago. People showed that they like good quality traditional Polish food.

KP: Tell us about the size of the farms you operate.

JŁ: My farm [in Stryszów] is two hectares. It is a self-sufficient farm, meaning it covers about 60 percent of our food needs, and we also give produce to friends and people who are visiting.

JR: My farm in England is much larger, about 400 ha, though half is forestry. This farm was converted to organic in 1975, and according to my license, I was the seventh organic farmer in England at the time. Today, organic food has taken a bit of a detour by going into the supermarkets, instead of finding its way to consumers locally.

JŁ: What’s interesting is we recently went to a workshop in England on the renaissance of agriculture. What was interesting for me was what the English people wanted to see as agriculture – and it was exactly where Poland is now, with the traditional and small-scale farming.

JR: Yes, that’s true. It’s quite amazing actually. My job here is to say to Polish people, try to avoid following what we did – and that’s difficult for Polish people, as they seem to think the grass is much greener on the other side. Essentially the message is going back to one’s roots.

KP: You mention in your workshops that the price of organic food approximates the typical supermarket price, can you explain this?

JR: If you buy from the farmer, you can pay practically the same price of the typical food in a supermarket, but receive much better quality. Most farmers look for a fair price, it’s the middle man who looks to make the profit.
JŁ: If you buy on the farm, sometimes the price is very cheap, almost too cheap… farmers know the situation, they don’t want to make big money, just get a fair price.