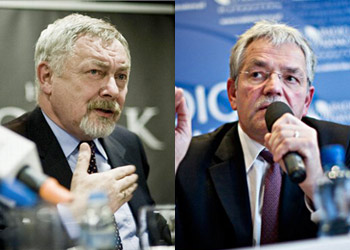 As the votes from yesterday’s municipal elections continue to be counted, several results look certain, including Krakow’s mayoral bids. It is very likely that Krakow’s current mayor, Jacek Majchrowski, will face Stanisław Kracik in a run-off on 5 December.

As voting centres closed at 10 pm sharp last night, the Polish media were allowed to break their election-time silence and gave the first poll numbers, initially declaring Civic Platform (PO) candidate Kracik the winner in Krakow. However, the newest results from this morning’s Rzeczpospolita show him at 33.3 percent (as opposed to last night’s 39.1 percent showings), behind Majchrowski’s 40.98 percent (polled at 37.1 percent last night), with 85.19 percent of votes counted. PiS candidate Andrzej Duda has 22.54 percent of the vote, with the remaining three candidates totalling 3.18 percent combined.

With neither candidate likely to receive over half of the vote, a run-off seems inevitable, and would take place two weeks after the first election, giving the candidates enough time to vie for the roughly 20 percent of votes that went to Andrzej Duda.