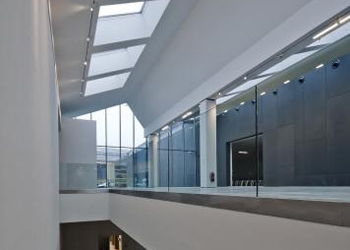 On 16 November, the building that will house the Museum of Contemporary Art in Krakow (MOCAK) opened in the Podgórze district. With more than 4,000 m2 of exhibition space, the structure faces the former administrative building of the famous Schindler Factory, now a branch of the Historical Museum of Krakow. The art museum has been realised in what was the factory proper. The entire area of the building, the facade of which is not even visible from the street, takes up about 10,000 m2. The project, which cost about 70 million złoty (around 25 million euro), was half-financed by the EU.

The inauguration of MOCAK kicked off with the show “Architecture for Sensitive Lives”, which presents the work of the building’s architects, Claudio Nardi and Leonardo Proli. The exhibition documents the successive stages of the construction of the MOCAK along with a model of the Investor Services Centre to be erected in Nowa Huta next year by the same architectural duo.

The everlasting debate over the creation of a centre for contemporary art in Krakow surprisingly dates back to the middle of the 80s, before the fall of communism in Poland.
One of the first achievements of its educational program, which began last February, is Edward Dwurnik’s exhibition “Battles of Grunwald”, inaugurated at the end of October in the western wing of the Wawel Royal Castle. The list of Dwurnik works displayed in Wawel also includes a modern interpretation of the epic battle between the Polish-Lithuanian chivalry against the Teutonic Knights in 1410.

The title of the exhibition refers also to the 600th anniversary of the largest battle of the Middle Ages, depicted with an overwhelming mixture of romanticism and patriotism in a famous canvas by Jan Matejko (1838-1893), now at the National Museum of Warsaw. Dwurnik considered his black and blue version of the episode to be his “personal Guernica”, in which the suffering silhouettes of the combatants are intentionally hardly recognizable from the sombre background.

It is hard to predict whether the MOCAK is aiming to buy artworks from big guns of the international haut monde to bolster its collection. So far, the museum has opted for a low-profile acquisition campaign, announcing the purchase of several interesting works from Polish artists. The permanent collection includes Tomasz Bajer’s incisive installation “The Minimalism of Guantanamo” (2008), Józef Robakowski paramount video “Walking” (1973), as well as set of paintings by Bartek Materka almost echoing the mass alienation topic permeating Dwurnik’s historical pieces.

Ms. Potocka also revealed to the Polish press that the museum is negotiating the temporary custody of a collection from the Neues Museum of Nuremberg (Germany). Furthermore, the MOCAK director has been invited by the council of the Swiss foundation Vordemberge-Gildewart to take over the organisation of next year’s edition of the grant competition. The works of the winners will be presented at the MOCAK in April 2011 along with the Polish artworks acquired for the permanent collection.
We recently got in touch with the Italian architect Claudio Nardi, who along with Leonardo Proli is responsible for the design of the MOCAK.

Krakow Post: In what way did the pre-existing architecture influence the final design of the museum?

Claudio Nardi: We were forced to consider the fact that the pre-existing area is rugged, almost hidden and “wedged” in the middle of the surrounding buildings. Therefore, the context decidedly influenced the architecture and played an essential role in the elaboration of the floor plan as well as in the overall shape and the leading patterns of the structure.
KP: Was the MOCAK conceived to interact with the other museums present in the Podgórze district?

CN: The interaction with the remaining museum structures is going to be natural but not obvious, mainly with the museum of history located in the adjacent building and once part of the former Schindler factory. Its presence is essential in reinforcing the significance of the MOCAK in the overall account of the city. Oscar Schindler’s museum allows us to find in the past of the city a symbolic bridge to gaze into the future of Krakow.

KP: The main building will not be visible from the street. Was this a stylistic choice or rather an architectural requirement?

CN: We tried to elaborate a language coherent with the pre-existing buildings, but at the same time we felt the need to give visibility and power to the structure from the outside in order to mark our presence on Lipowa Steet. The new sections of the museum expand themselves, retaining an ideal continuity with the older pavilions. The shed-like roof reaches out to the new exhibition rooms, hooking itself to the anthracite outdoor wall overlooking the street.

KP: Could you tell us something more about the facilities for the artists involved in the residence projects?

CN: The different buildings form a ring around a kind of “urban path”, crossing the main area of the museum along a daily route that can be seen as a fragment of the city itself.

This walkway overlooks a wide loggia projected to display open-air exhibitions. Along the same path visitors can peer into the different rooms including the residences, the workshop, the library and the cafe, which are all located on the same path. We wanted to stress the concept of an urban structure that can be experienced as a small town in the city.

KP: Why are you sure that the MOCAK won’t be a “sculpture” like the Guggenheim Museum, that you mentioned in an interview with Gazeta Wyborcza?

CN: I like the Italian concept of the “diffused museum”, in reference to a structure that does not clash with the surrounding area, reinterpreting the adjacent context in a modern key.

KP: Why did you decided to open a branch of your Florentine studio a few steps from Krakow’s Old Town?

CN: At the beginning we felt the need to follow the plan and the building of the museum step by. It was a particularly demanding for us project considering the budget and the deadline, but also other aspects such as the presence of a river in the surroundings, and the disastrous conditions of the pre-existing buildings. Later we won a second contest in Krakow, to build an important administrative building, therefore, our partnership with this city is going to continue.