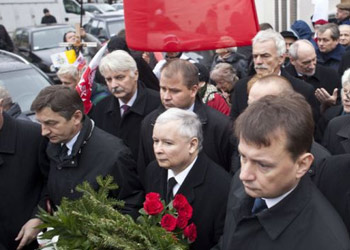 Though the Russian-led investigation into the Smolensk air crash is still underway, this week two unsatisfied members of the Law and Justice (PiS) party decided to take matters into their own hands and go to Washington, D.C. to ask for help.

Anna Fotyga, a former foreign minister and Member of the European Parliament, travelled to the American capital with Antoni Macierewicz, a former vice-minister of defence in Jarowsław Kaczyński’s government. Both politicians are active members of PiS, with Macierewicz serving as the leader of the party’s independent investigation committee into the Smolensk crash.

The two politicians set out from Poland on Monday with a letter from Jarosław Kaczyński and a petition signed by 300,000 Poles with the goal of meeting with Republican members of the U.S. Congress to push for the formation of an independent and international investigation into the Smolensk crash that killed President Lech Kaczyński and 95 others over seven months ago. At the moment, the accident is being investigated by a Russian-led team as well as an official Polish investigation committee, with Moscow largely controlling the release of investigation-related documents to the Polish side.

In June, Peter T. King, a Republican Congressman from New York state, called for an independent international investigation, though his original initiative went unsupported. Yesterday, the two PiS envoys were to meet with King, but instead had a meeting with California Republican Congressman Dana Rohrabacher, a member of the Foreign Affairs Committee of the House of Representatives. While Rohrabacher confirmed King’s sentiments, nothing concrete came out of the meeting, according to Gazeta Wyborcza.

“They represent a legitimate concern of the Polish nation, that the accident which claimed the lives of their leaders should be carefully studied and understood,” wrote Congressman Rohrabacher, adding that “given the history of relations between Russia (including the USSR) and Poland, there are many reasons to be suspicious. Besides, if mistakes were made, Russia has to admit them and make sure that they are corrected.” However, he added that “at this point, I assume it was either an accident caused by the weather or a mere incident of incompetence, but certainly I am willing to consider without bias all the facts connected with this matter”.

At a press conference this morning, Macierewicz announced that they had successfully handed over the petition to Ileana Ross-Lehtinen, a Republican Congresswoman from Florida, along with “hitherto unknown photographs showing the destruction of evidence of this disaster”. Beginning in January, Ross-Lehtinen will chair the Foreign Affairs Committee of the House of Representatives, and is therefore considered one of the most important members of the Republican Party in matters of foreign relations.

He also announced that in addition to the 300,000 signatures already present, another 30,000 were added from Poles in New York.

Throughout the week, the trip has been criticised by the governing Civic Platform (PO) party, most notably by Foreign Minister Radosław Sikorski, who said on TVN24 on Wednesday that he feels “humiliated as a Pole and as a [foreign affairs] minister” by the actions of Fotyga and Macierewicz, adding that the U.S. Congress “has no power over this matter” and criticised what he sees as the politicisation of the Smolensk tragedy.

“We look forward to any practical results of this visit,” Sikorski stated. “If Minister Fotyga and Minister Macierewicz obtain, for example, a record of the last conversation with President Lech Kaczyński, then I congratulate them.” President Komorowski shared the foreign minister’s sentiments, adding that the visit is “an embarrassment from the perspective of an opinion about Poland, and opinions about the people in charge of Polish diplomacy”.