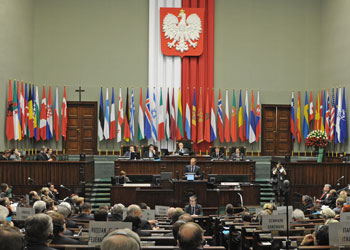 On Friday, the NATO summit will begin in Lisbon, Portugal. Ahead of that, however, leaders met in Warsaw over the previous five days at the NATO Parliamentary Assembly’s 56th annual session. During that time, the Assembly passed 15 resolutions and elected several new leaders.

The session comprised about 300 parliamentarians from all 28 NATO member states as well as EU, OSCE and Council of Europe representatives. The topics discussed include an increase in co-operation between NATO and the EU, which Prime Minister Donald Tusk encouraged when speaking in front of the Assembly. The problem of defence spending in light of the financial crisis was also a notable topic of debate.

The final day of the session yesterday brought one of the most significant resolutions, promising the “support of Georgia’s sovereignty and territorial integrity”. The movement has been hailed as a blow to Russia and its aggressive stance on its territorial dispute. According to the Assembly, the disputed regions of Abkhazia and South Ossetia are occupied parts of Georgia and not independent, and “Russia must withdraw its troops”. Not surprisingly, NATO’s show of solidarity with Georgia was met with heavy criticism by Russian authorities, and is seen as a confirmation of Georgia’s path to NATO membership that began in the Bucharest summit.

A new parliamentary president was also chosen, Karl A. Lamers, a long-time member of the German Bundestag (lower house of the German parliament). In addition, five new deputies were chosen: Mike Ross from the U.S., Hugh Baley from the UK, Petras Austrevicius of Lithuania, Jean-Michel Boucheron of France, and Jadwiga Zakrzewska of Poland, who had served as the dead of the Polish delegation to the Assembly.