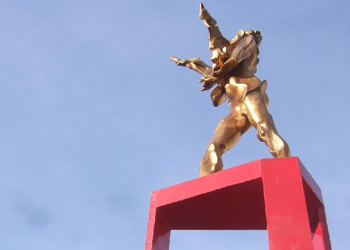 The work was assembled on the spot during the night by the artist himself, Krzysztof Krzysztof, with a group of volunteers who helped him to raise the 160-pound installation. “It will be the first sculpture in Krakow since the Neil Armstrong monument to have no ideological or patriotic meaning,” explained Krzysztof to the Krakow Post.

The elongated, sexless sculpture made from resin and painted in gold was purposely installed next to the controversial monument to Piotr Skarga, a locally renowned theologist of the 16th century. The design of the gawky Skarga monument, erected in 2001, was discreetly assigned by Krakow authorities to Polish sculptor Czesław Dźwigaj. Dźwigaj had made a name for himself in the world of religious art, designing more than 50 works devoted to Pope John Paul II.

“Passing by the Skarga sculpture I began to think how people have complained about this monument, but have done nothing to change the current situation,” says Krzysztof.

Two years ago, Dźwigaj agreed with Krakow Major Jacek Majchrowski to move the monument to an adjacent courtyard, which is now the property of the Jagiellonian University. Nevertheless, the sculpture still stands in the same place.

“I deliberately omitted the official procedure of obtaining a license to install a sculpture in a public space,” explains the sculptor. Later, Krzysztof announced his intention to ask the City Council for a 20-year permit to prevent the eventual removal of his work from the square.

“I will try to show my untitled sculpture to the younger generations as well in order to make them think actively about the meaning of art in a practical context,” he adds.

The Skarga monument, strongly criticized by some voices in the local media, is only one of the many examples of contemporary monuments to have sparked strong reactions amongst Cracovians. The local edition of Gazeta Wyborcza has often used the term “kitsch” of late in reference to the look of the latest multimedia monuments built on Plac Szczepański and the Market Square.

This article was co-written by Marta Niespodziewany