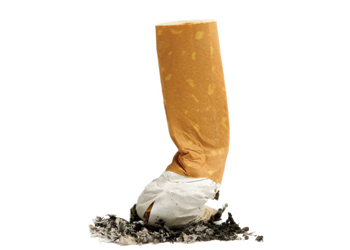 As St. Mary’s struck midnight last night, every last cigarette in Krakow’s bars and clubs should have been extinguished. Whether that happened – and more importantly, whether anyone was enforcing it – is another story as a nation-wide smoking ban goes into effect in all public places in Poland.

Though smoking has been banned in most offices for some time, the law that went into effect at midnight on 15 November bans smoking in all public spaces, including hospitals, trains, public transportation stops, playgrounds, restaurants, and most controversially, pubs and clubs.

According to the law, a violation results in a 500 złoty fine for each individual caught smoking, as well as a 2,000 złoty fine for the establishment owner if no sign indicating a smoking ban is displayed. In Krakow, according to TVP Info, the city ran out of “no smoking” signs for pubs and clubs, leaving many owners to make their own before today’s deadline.

At the moment, the law can only be enforced by police officials, though bar owners have the right to ask smokers to put out their cigarettes or leave the establishment. While fines within closed spaces will be relatively easy to give out to those caught, at the moment, the police have no way to enforce the new policy at public transportation stops, since the law is not specific enough in its wording to say what exactly constitutes the area at a stop where smoking is not allowed.

Local pub and club owners are concerned about a potential loss of revenue from smokers. However, the results have been mixed: New York City saw a nine percent rise in business after the city banned smoking in bars, while a few days ago, the Netherlands reversed a ban after businesses saw losses.

Poland is the 25th EU nation to implement a smoking ban since Ireland began the trend in 2004.