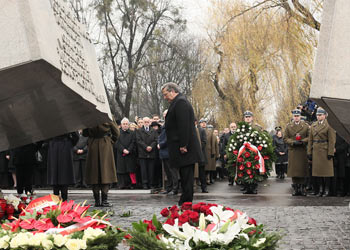 Today, 10 November, marks the seventh anniversary of the Smolensk plane crash that killed President Lech Kaczyński and 95 others in Russia. To commemorate the anniversary, President Bronisław Komoroski revealed a new monument to the victims at exactly 8:41 am this morning, the time of the crash at Smolensk.

The monument, consisting of two massive blocks of white stone with the inscription “In memory of the 96 victims of the plane crash near Smolensk, 10-04-2010”, lies in the Powązki Military Cemetery in Warsaw, above the spot where 12 of the victims are buried. The two granite blocks resemble broken airplane wings entering the ground.

Though the ceremony was also attended by Prime Minister Donald Tusk and several Warsaw city officials, as well as family members of the victims, one figure was noticeably absent: the late president’s twin brother, Jarosław Kaczyński, along with any other official from his Law and Justice party. Instead, he led his own march or remembrance to the Presidential Palace, where he laid flowers and prayed.