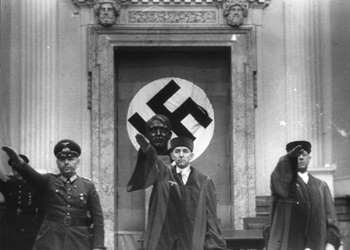 In the months following the collapse of Hitler’s thousand-year Reich, Allied intelligence officers worked to identify and remove Nazis from positions of authority in occupied Germany. Among those active in the U.S. Office of Military Government in Germany (OMGUS) was a 34-year-old Harvard PhD, fluent in German, Captain Samuel H. Beer.

Beer was particularly interested in documenting the attitudes of the German people toward the Nazi regime. He interviewed political leaders of small towns and villages, clergymen, judges, lawyers, resistance fighters, and academics.

From 1964 to 1968, I had the privilege of working as a teaching fellow in Sam Beer’s now legendary undergraduate general education course at Harvard, “Social Sciences 2: Western Thought and Institutions”. Sam always included material in his lectures from the interviews he had conducted in Germany in 1945. One interview in particular had an immense impact on the 300-plus students in the lecture hall; it was the story of young woman named Christina Pasternak.

Pasternak was born in Poland in 1911. She earned a doctorate in child psychology and wrote articles for magazines and newspapers. In 1935, she decided to become a nun and entered a convent in eastern Poland. The convent was taken over by the Russians in 1939 and turned into military barracks. Christina later moved to Krakow in German-occupied Poland.

She became involved in an espionage network supplying information to the Allies about “what was being made in certain factories, what routes munitions trains took, etc.” The organization operated successfully for most of 1940 but she was eventually betrayed by several people who were subjected to harsh Gestapo interrogation. She was arrested in the middle of the night and sent to a Gestapo prison in Krakow – but she refused to supply the names of other members of the network. She was interrogated 31 times in three-and-a-half months, “sometimes for as long as three days without stop. She was terribly beaten, with sticks and pieces of iron. So badly that today she cannot remember her address in Poland and cannot remember much of the English language, although at one time she translated Oscar Wilde into Polish.”

She was then told that she would be shot. “She, as a good Catholic, prepared herself for death.” Five prisoners were shot around midnight that night, but Christina was instead taken by the Gestapo for trial in Berlin. There she was again interrogated and beaten.

Finally the Gestapo said that they had a cell in which no one ever managed to stay more than 24 hours – if they did they would certainly go mad. She was put into this cell. It was a large room with about 20 straw pallets on the floor, and a chair and a table in the middle. In the pallets and on the furniture were not thousands but millions of bed bugs (Wanzen). She had not sat down for ten minutes before these bugs were all over her, on her legs, in her underwear, biting her and sucking the blood. She reached down on her leg and it was a mass of blood. The stench was terrible The itching was unbearable. She sat up for two days, but then was so tired she fell on the floor. Now the bugs were everywhere, in her ears, her mouth, around her eyes. When she scratched she opened wounds on her body and the bugs flocked into the open wounds. She became so swollen that she did not look like a human being.

A new matron, an older woman, took pity on her and had her removed from the room. The matron bathed her and treated her wounds. Christina slept for 48 hours and eventually recovered.

She was told, nonetheless, that she would be tried before the notorious Volksgerichtshof and was questioned yet again. “She told them that if the Gestapo couldn’t get anything out of her in seven months, these investigators couldn’t hope to either. They did not beat her.” She was then transferred to a prison in Ansbach from which she was eventually liberated by American troops.

At that point, Christina Pasternak, only 34 years old, disappears from the historical record. Perhaps today, through HNN and the new possibilities opened by the Internet, someone will be able to tell us what happened to this courageous woman after 1945, thus providing her with at least a small measure of the place in our historical memory that she deserves.

This article first appeared here on the History News Network.