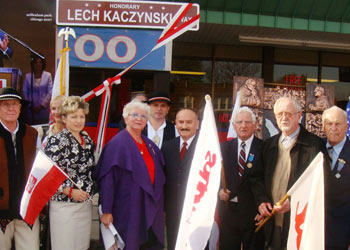 Lech Kaczyński, the former Polish President killed in a recent plane crash, will have a street named in his memory in Chicago, on the the Avenue of Honor. The street will run at the crossing of Belmont – Central avenues in a very popular area of Portage Park. It will be unveiled on Polish Independence Day, 11 November, and there will be dedication events on 12 and 13 November.

At the first intersection near Belmont – Central, a ceremonial unveiling of a plaque with the name of the street will be hung. During the ceremony, a special letter from Jarosław Kaczyński will be read by the cousin of the president, Jan Tomaszewski.

Daniel Pogorzelski of the Historical Society of North-West Chicago got the ball rolling for the street naming. Two councilmen, Ariel Reboyras and Thomas Allen, helped with support from the mayor of Chicago, Richard Daley. The intersection of Belmont Avenue and Central Park is more than a hundred years old and the neighborhood was mostly Polish immigrants.

The district around the streets of Belmont and Central Park was known colloquially as Władysławowo. One of the central points of the area was the beautiful church of St. Ladislaus. Another reminder of those old, romantic days is nearby Frederic Chopin Park. For those families that come from the old Polish neighbourhood, everything there has been preserved from the times of their fathers and grandfathers, as a reminder of past Polonia.

Also, on 11 November, there will be a celebration of the Polish Independence Day at the Jesuit Millennium Center.