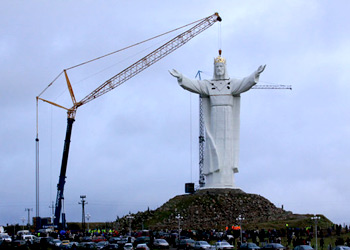 This weekend, a giant statue of Jesus Christ arose in the Polish town of Świebodzin, which lies in northwest Poland. Standing at 35 metres (52 metres with its base), the statue is now the tallest representation of the deity in the world, out-sizing both Bolivia’s Cristo de la Concodia (34.2 metres) and the more famous Christ the Redeemer in Rio de Janeiro (30.1 metres without its pedestal). Its official name is “Christ the King” (“Pomnik Chrystusa Króla” in Polish).

Though the statue will not officially be consecrated until 21 November, work on it was completed over the weekend, including the difficult task of attaching the head to the rest of the body. Made of plaster and fiberglass and weighing about 440 tonnes, its construction took five years.

The $1.5 million statue was built using private donations from residents of the 21,000-strong town, and designed by priest Sylvester Zawadzki.