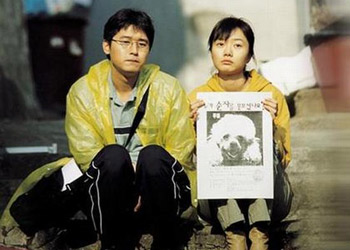 Following on from the launch in Warsaw, the Five Flavours Film Festival will be touring other Polish cities, presenting a creme de la creme version of the event for cinema-goers. A selection of eight features will be shown in Poznań, Katowice and Krakow. Hosted by Kino Pod Baranami, the Cracovian leg of the festival will take place from 8th and 14th November.

Pod Baranami will host one screening per day with the exception of the “Thai Horror Night” when horror movies Shutter (2004) and Alone (2007) both directed by Banjong Pisanthanakun and Parkpoom Wongpoom, will be shown one after another on Saturday with a food break provided by Thai restaurant Samui (ul. Wiślna 10).

The Cracow edition will focus more on South Korean cinema, displaying five productions from that country, including Dream (2009) the latest picture of the acclaimed filmmaker Kim-ki Duk and the black comedy Barking Dogs Never Bite (2000) directed Bong Joon-ho (For an interview with the latter by the article writer click here).

In order to promote the Cracow edition, Pod “Baranami staff are arranging the masked flash mob “Ping-Pong Korea”, which will take place on the Market Square, Saturday 6 November, at 3 pm. All wannabe participants are required to bring a ball and ping-pong bat half an hour earlier, next to the Town Hall.

Born three years ago as an overview of Vietnamese cinematography, the Five Flavours Film Festival has progressively expanded its horizons including features and documentary films from other Southeast Asian countries.

Apart from Singaporean visual artist Ho Tzu Nyen, who took the floor on the Warsaw stage this year to present his two full-length movies, in past editions FFFF has hosted other notable Asian cinéastes such as the Vietnamese Bui Thac Chuyen and Pen-Ek Ratanuarang. The latter, who is considered one of the initiators of the Thai New Wave, also paid a visit to Cinema Pod “Baranami” last year.

Though the Five Flavours Film Festival can hardly be compared to other European showcases such as the Italian Far East Film Festival (with more than 60 Asian films screened per year), FFFF, now in its Fourth edition, represents the only regular hangout in Poland for Asian movie buffs.

Since its first edition, FFFF has been organized by the association Arteria, founded in 2004 to back young artists’ projects including the Polish Art Festival in London, a three-day event devoted to the artistic achievements of Polish musicians and artists resident in the UK.