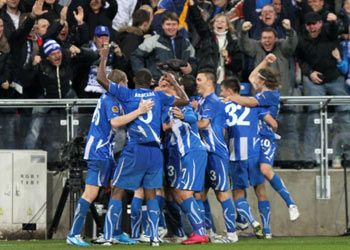 On a chilly night in Poznań, on a damp pitch under a withering drizzle, Polish champions Lech Poznań shocked one of the world’s richest football clubs, outscoring Manchester City 3-1 in front of a packed house at Poznań’s City Stadium. The victory for Lech comes on the heels of their defeat of Wisła Krakow.

The surprise victory came in the second match of their Europa League pairing, the first fixture of which was already considered cause for celebration by fans of Poliah football when Lech scored one goal against the Premiership superclub, despite losing 3-1.

After pulling ahead in the 30th minute on a goal by Dimitrije Injac, which he lashed in off of a low volley after Man City was unable to clear a cross by Krivets, Lech held out to the break in strong spirits, but quickly conceded a goal to draw the match even. That was to be a set-piece goal off a header from Adebayor, who beat out his defender to slam home a cross from Milner’s corner kick in the 51st minute.

While the away goal from the Togo native seemed to render an aggregate win for Lech all but impossible, the Polish squad pressed the attack, and nearly paid the price for it as they moved men up the pitch and narrowly escaped being caught out on the counterattack. Lech’s pressure also repeatedly produced credible scoring chances, until a hopeful Poznań shot in the 86th minute was headed away from goal by Dedryck Boyata, only to instantly be rebounded into the corner of the Man City net off the rising head of Lech’s Manuel Arboleda.

The jubilant crowd scarcely had time to compose itself when, in the 90th minute, 19-year-old substitute Mateusz Możdżen fired a rocket in to the top left corner from outside the box.

The Manchester side has a payroll many times that of the Polish champs, but lacked several key players in the Thursday fixture, including captain Carlos Tevez, who is in Argentina being treated for an injury by his own doctor.

Lech is now undefeated in the group round of the Europa league, where they had drawn a spot in the “Group of Death” with Man City and Italian goliaths Juventus. Lech drew with Juve in their first time out against them using the same combination of sometimes freakishly lucky and sometimes unquestionably superb offensive successes. They stand at the top of the table for the moment, and will play their second meeting with Juventus at home on 1 December at 9:05 pm CET, and their last match of the group round against FC Salzburg at 7 pm on 16 December in Salzburg, Austria.