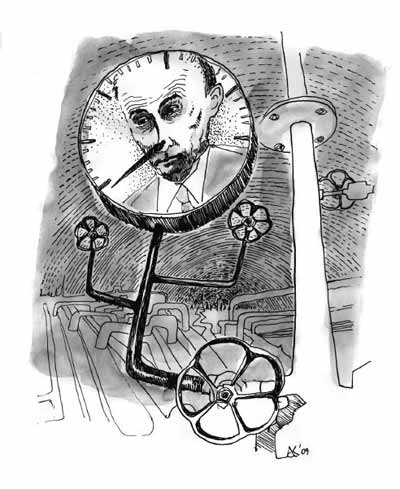 Over the past weeks, both Poland and Russia have been striving to come to an agreement over the transport of natural gas between the countries, and the results may finally be settled this weekend. This afternoon, the European Commission announced that it would assess the new Polish-Russian gas deal within 48 hours, to see if it is compatible with European Union law.

On 17 October, following many hours of talks in Moscow, Poland and Russia finally reached an agreement on a draft contract for the delivery of gas to Poland and increased the agreed upon amounts to two billion cubic metres annually.

According to the deal, Gazprom will supply PGNiG (Polish Petroleum and Gas Mining), the largest Polish oil and gas exploration and production company, until 2022 (previously signed until 2037) for domestic use, and until 2019 for transit to other European consumers.

On 18 October, Mr. Paweł Kowal, a member of the European Parliament (PiS), when asked why it is necessary for Poland to sign a new gad deal with Russia, said: “Yesterday, an arrangement from Moscow showed that it is possible to sign a contract until 2022, simultaneously slightly increasing the volume of the natural gas delivered to Poland. Binding oneself by an agreement to 2037 would be economically unjustified for Poland, particularly in the situation of the completion of the Gozoportu structure in Świnoujście in 2014, and future gas mining potential.”

He also said that paradoxically the European Commission, rather than the Polish government, supported Poland’s raison d’être.

Poland reached a preliminary agreement with Russian gas monopoly Gazprom last year in January, but the contract has not been signed due to worries that it is incompatible with European Union regulations.

Mr. Kowal stated that leaving the contract valid until 2022 will allow Poland to decide at the time whether the geological predictions indicating a high potential for “blue fuel” in Poland will be confirmed.

Earlier during the negotiation of the Polish-Russian gas agreement, Mirosław Maliszewski, a member of Parliament (Polish Peasant Party) accused PiS of using this agreement as part of their political arguments during a press conference at the Sejm.

To the question as to why PiS is opposed to this agreement, and the solutions acceptable to PiS, Kowal answered, “[PiS] had consistently opposed the Polish-Russian gas agreement in its previous shape from the beginning.

“First of all, the reason was that the period of the contract was too long, but also that is was not in line with EU law.” He explained that “the limited access of third parties to the Yamal gas pipeline was an open infringement of European Union regulations”. Finally, he also added that “arrangements concerning fees for the transit of the raw materials through Polish territory as well as the issue of discontinuing overdue transit payments by the Polish side from the Russian side raised doubts”.

Mr. Kowal said that his party mainly opposed the legal arrangements contained in the contract, but overall agreed that it is necessary for Poland to regulate the issue of gas supplies immediately. This would provide corporations with economic safety, but most importantly, gas in polish houses.
According to the European Union regulation, the owner and manager of the transit pipeline cannot belong to the same company. It is possible that Russia was trying to create a Polish precedent to contravene the EU’s anti-monopoly legislation and hoped to protect Gazprom’s interests in Europe.

When asked if Russia has chosen Poland as a ground for testing European common energy policy, Mr. Kowal said that he doesn’t think that Poland is any training ground for testing by Russia. He mentioned that Poland has a good transit geographical position and fairly large internal mining industry.
Over 70 percent of Polish energy needs to consist of imports, 95 percent of which must be provided by Russia and countries belonging to the Commonwealth of Independent States. The other 30 percent comes from domestic production, coal in particular.
“Despite everything, Poland is less susceptible to pressures than Finland, Slovakia, Bulgaria, Lithuania, Latvia and Estonia, which import their entire gas supplies from Russia,” Kowal added.
“Poland is in a very good position for negotiation, since Russia cannot reduce supplies of gas to Poland overnight and [thereby] threaten the energy security of its chief European trading partner, Germany.”

One thought on “A New Gas Deal”