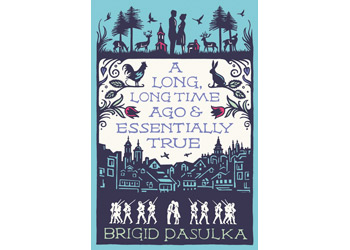 It’s not often that a novel based in Krakow wins literary awards in the English speaking world, so this month I’m going to review a book that has already been mentioned in April by the Krakow Post, but not adequately described. The novel is A Long, Long Time Ago, and Essentially True by Brigid Pasulka, and it won the Ernest Hemingway Foundation Award for a debut novel this year. The narrative takes place in two different worlds, one in 1990s Krakow, the other in a small village in the mountains south of Krakow just before and during World War II. The 1930s narrative is about a young couple, Pigeon and Anielica, and their love in a time of war and struggle. The 1990s story is the tale of their granddaughter, nicknamed Baba Yaga, who moves to Krakow from their small village and tries to make her way in post-communist Poland. The novel swings back and forth between these two times, weaving a fairy tale of love and honour that covers much of Poland’s history in the 20th century.

Some reviewers have pointed out the similarities of Pasulka’s novel with Jonathan Safran Foer’s Everything is Illuminated, which goes back and forth between the protagonist’s modern day search for his grandfather’s gentile saviour in Ukraine, and a quasi-magical story of pre-war Trachimbrod where his grandfather came from. Similarly in Essentially True, the village where the family saga begins before the war is painted in fairy tale proportions. Pigeon, the grandfather, is brilliant, resourceful, and incorruptible. Anielica, his love, is perhaps the most beautiful woman in Poland. When the story swings back to 1990s Krakow it becomes undeniably grittier. Thus goes the whole novel: the sparkling green of the pre-war village one chapter, the cold grit of post-industrial Krakow the next. The heroism of resistance in World War II, then the reality of drug pushers in Nowa Huta. For those of you who have read Isaac Bashevitz Singer, there are also shadows of his novel, The Slave. Both begin in a little hut in the Carpathian mountains with a lonely sheep herder. Only Pasulka’s village has nothing to do with that village, even though geographically they are placed in more or less the same area on the map. The Slave’s village is backwards, to put it nicely, and hell-bent on incest. The inhabitants of Pasulka’s village are moral, loyal, loving, tolerant, and noble.

On its own, the narrative of the war generation might tend towards cliché, but paired with the saga of the granddaughter Baba Yaga in the 90s, it forms a complicated whole. The demands of everyday life and its imperfections are the focus of the chapters in modern-day Krakow. Baba Yaga is working in a bar and taking care of an ageing prima donna, while living with her acerbic Aunt Irena and her cousin Magda. Brigid Pasulka catches the ambivalences of a Poland leaving its heroic past – Irena wants her daughter to be successful and take advantage of all the new opportunities and choices she has, but has very little idea of how difficult it is to navigate those new opportunities. In their turn, the younger generation have a future with choices and hope, but little or no opportunity for heroism, and don’t necessarily know what to do with the stories from their parents and grandparents. The resulting dialogues make for fascinating reading. Ms. Pasulka also fills the novel with a wealth of detail that comes from her long experience with Krakow: she visited here in 1995 and stayed for years, and has maintained a close relationship with the city for the past 15 years. Though the protagonists of the story are all Polish, Ms. Pakula’s writing style is distinctly American, which makes the Poland she describes very accessible to English readers. If you are looking for a book to learn more about Poland, and have a good read, this is a book I would highly recommend.