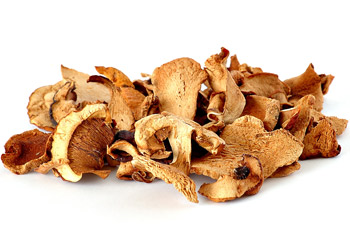 The torrential rains and low temperatures that frustrated everyone in the summer meant that this year’s mushroom harvest wasn’t one of the best, but the damp, mild autumn means that it’s been extended longer than we might have expected. Boxes of mushrooms started appearing in the markets, on the sides of major roads and on Allegro in early September and were still going strong at the end of October. Mushrooming trips have become a common mid-week and weekend occurrence; windowsills and ovens have been working hard at drying fungi. Mushroom maps of Poland sprung up on the Internet and regular media reports encouraged pickers to get their harvests checked over by mushroom experts who can distinguish between edible and potentially lethal mushrooms at 50 metres.

The origins of the Polish and even Slavic obsession with mushrooms are lost in the mists of time, but together with Italy, Poland seems to lead the European field. Around 80 percent of Poland’s 7.6 million hectares of forests are state owned, so there is no shortage of places to go foraging, and you can pick an unlimited amount of mushrooms, unlike in countries such as the UK. In fact, Poland exports around 20,000 tonnes of mushrooms every year, mainly to Germany, where people prefer to buy their wild food from supermarkets and use their forests for hiking not foraging. Poles living in the UK help supply UK restaurant menus, and at £100 a kilo for prime ceps, it’s a lucrative pastime.

Mushrooms are strange creatures. They’re not plants, as they don’t contain chlorophyll, the substance that allows plants to convert sunshine into energy, so they have to live in collaboration, or symbiosis, with other living things (like ceps or truffles that grow on tree roots), or they grow on the decaying remains of other plants (like shiitake or the common white mushrooms). This is why it’s much more difficult to cultivate the former; symbiotic mushrooms need living trees and a whole ecosystem, so intensive production would mean cultivating a whole forest.

Secondly, the part we eat is only a small portion of the whole organism, most of which lives underground as a dense network of almost invisible fibres that spread throughout the soil to gather nutrients. It’s so dense that if the fibres in a single cubic centimetre of soil were lined up end to end, they would stretch for around two kilometres. The network gathers nutrients and energy and when it has enough, it gathers it together, pumps it full of water and sends a new, even denser growth up above the surface. The function of this growth, which is the bit we’re looking for, is to release the spores that will spread and grow into more mushrooms. I don’t know about you, but I think this is kind of amazing.

So the next time you’re picking mushrooms, please be considerate of the busy fibres below the ground and only pick mushrooms that have a fully open cap (not only does this mean they’ve spread their spores, they’re also tastier) and don’t rip them from the ground; cut them close to the ground with a sharp knife so that they have a chance to regroup and have another go at reproducing.

As you might expect, the new body above the surface is pretty valuable to the network below, so to preserve their hard work it’s often pumped full of poison to prevent it being eaten by animals (including us) before it’s had a chance to spread. Unfortunately, poisonous mushrooms aren’t always easy to distinguish from their edible brothers, and mushroom poisoning is a sad fact of life in a country obsessed with fungus foraging. Every year there are 700 reported incidents and 50 deaths, a disproportionate number of them children. In an effort to prevent these needless deaths, Sanepid (the Sanitary and Epidemiological or environmental health authority) offers a free public service for mushroom foragers who can go and get their harvest checked for free by experts at their local office. Polish law also requires anyone selling mushrooms to get their produce certified by a registered expert. Certification is free and valid for 48 hours, but unfortunately the law is frequently ignored and enforcement is rare, so every year mushroom poisonings still make the headlines.

Krakow’s local laws also mean that while the public markets are no longer obliged to employ a mushroom inspector, anyone selling mushrooms there has to get their produce checked and certified. This is enforced by the market’s management. So it’s the Stary Kleparz for me. I love mushrooms but I’m not an expert and poison-tasters are hard to find these days, so I prefer to get them from a place where I’m confident they’re not going to be my last pleasure.

There’s a Polish saying that roughly translates to: “All mushrooms are edible. Some, only once.” But hopefully the fact that you’re reading this means that you’ve come through the 2010 mushroom season unscathed.

One thought on “Fork Out: The Magic of Mushrooms”