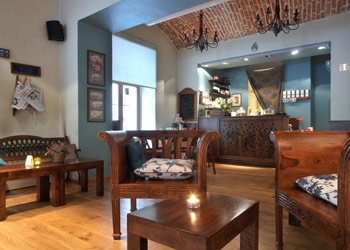 Although Kazimierz is packed with pubs and cafes referring in one way or another to the quarter’s Jewish heritage, it is still possible to stand out as such, a perfect example being the Cheder Café. Conceived as something more than just a hangout with a Middle Eastern feel to it, Cheder (pronounced “headair”) also serves as a cultural and educational centre – perhaps no surprise given that this is an offshoot of the Jewish Culture Festival Association.

On entering the venue, guests are enveloped by a soothing ambiance – especially so for those who enjoy cosy, library-like surroundings. This comparison is not random – high wooden shelves with ornamental carvings in the shapes of Hebrew letters (which form a lion – symbol of Jerusalem and Jewish culture) are heavy with books, and guests are welcome to browse amongst them. Other Jewish ornaments are discreetly placed in such surprising spots as coat racks or a menora-shaped lamp embedded in the wall. This distinctive design, along with matching Oriental, yet kitsch-free music, made me want to linger a little longer.

Those who decide to try some of the Middle Eastern specialities can choose from among traditional Israeli and Moroccan beverages – tea with mint and brown sugar or coffee spiced with cardamom, brewed in a finjan. There is also a wide variety of wines to pick from, including kosher options. As for food, only rather small portions of pita bread stuffed with various vegetables and cheeses are offered, along with snacks such as sun-dried tomatoes and olives. But it was the lack of traditional desserts that made me feel a little disappointed. Although one might argue as to whether baklava would fit well with Cheder’s concept, it surely feels more Middle Eastern than the only cake on the menu – a thoroughly European tart.

Yet as mentioned earlier, Cheder is not only a cafe. When asked about its mission, Kornelia Binicewicz, the manager, says that she considers Cheder a place where Jewish culture intertwines with other traditions and customs. Thus we find Jewish motifs and elements in places that we hadn’t thought of before. This concept is reflected in the events organised at the cafe. As a part of a bigger project called MuLaKuŻ (short for Jewish Culture Musical Lab), Cheder presents modern Jewish music as a dynamic and developing style. Just last month, the cafe hosted a concert by the band Drom, with their heady mix of Gypsy music from Poland and Russia. Meanwhile, those in love with 20th century literature were able to enjoy discussions with renowned translators Leszek Engelking and Anna Akbike Sulimowicz at the Literature and Memory meetings. It seems that the educational mission of the cafe doesn’t limit itself to cultural issues – we were able to meet the cofounders of the Combatants for Peace, an organisation that joins Israeli soldiers and Palestinian policemen in the shared effort of bringing an end to violence in the Middle East. I was intrigued to learn from Ms. Binicewicz how bustling a place it will continue to be in November. Both MuLaKuŻ and Literature and Memory are going to get follow-ups. The guests will also have a chance to participate in yet another unique musical performance, this time by the Haferflocken Swingers, a German band that brilliantly juggles genres.

Last but not least, guests may be curious about the name of the venue. While anchored in the past, it also serves as an indication of the cafe’s present function. This particular part of the building used to be a prayer room, a part of the High Synagogue complex devastated during World War II. Rebuilt thanks to foreign benefactors, it now refers to the term cheder – Jewish school – in fulfilling its educational mission, allowing us to dive into the Jewish world by reading books from the vast, still developing collection or participating in numerous events. A much-needed bridge between the past and the present, Cheder honours the history of this persistent, vivid and diverse culture while looking ahead to the future.