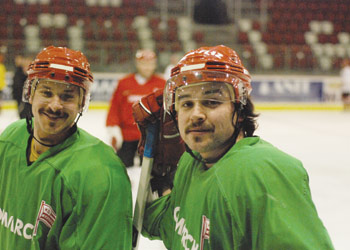 The Krakow Post had a chance to sit down with David Kostuch and Rafał Martynowski, Cracovia Ice Hockey’s two new imports from Canada. The two are cousins, and have known one another since their childhoods in the Toronto area. After growing up as close friends, the two parted paths as teenagers, when Martynowski left home to play semi-pro and pro hockey around Canada and the U.S., then moving to play in Pfaffenhoven, Germany. Kostuch went to play at the university level in Buffalo, New York. The two came to Krakow together after being approached through an amateur all-Polonia team they played with in Toronto, the Polish Hussars.

Krakow Post: Tell me what it’s like to be here in Poland. Are you psyched to be here?

David Kostuch: Yeah, I love it. I love being here. The city is amazing, and playing hockey is really fun here. For me, it’s my first year as a pro. So I find it really different and fun. It’s also about a new level of maturity for me. It’s just different and I like it here.

Rafał Martynowski: For me, when I heard in the summer that we had an opportunity to come here, I was so excited. Especially with my cousin. You know, it’s one thing to come here by yourself, but when you have somebody you know, like a good friend, a family member, it’s really exciting. It’s been awesome so far.

KP: Do the fans respond differently here than in North America?

DK: Very differently. In North America, everyone just sits down quietly and watches the game. If you score, they’ll get up and cheer. But here there’s constant noise, constant cheering, constant chanting. It’s different. It’s really fun to be in the game, especially at home.

RM: I’m more used to it – in Germany they’re loud like that. I think everywhere in Europe they’ve always got drums or something. I love it. It pumps you up, too.

DK. Especially if you make a nice play – then if the play keeps going and the fans go crazy because of that nice play, and you get the puck again and you want to make another good play. It really motivates you to do better.

KP: What are the differences in the style of play you’re used to and the style here?

DK: I think our style is more of a run-and-gun, go go go, whereas here it‘s more patient, and taking your time with things.

KP: Is there a lot more contact in North American hockey?

KP: Is part of that because the game is officiated differently here?

DK: I don’t know, I think it’s just the way we grow up playing. It’s just the style. Here, there could be a lot more bodies thrown around, but it’s hard to be more aggressive because of the big ice surface. You’re going to really have to go out of your way to throw a big hit. While on our ice in Canada, the guy’s right there. You’re going to hit him. We just grow up to play aggressively.

KP: What do you hope to bring to the team?

DK: Energy: energy to the room, energy to the ice. If we can, to throw a couple of bodies around to get the guys going – to score goals, to try to win games. To make it to the championship!

RM: To win the championship. And the coach wants us to play a Canadian style of hockey. He likes that. He likes the go go go, the throwing bodies around. He tells us to do that.

KP: What motivated you guys to come here? Was it the opportunity to play in Poland, to play together?

DK: Playing in a top league. Playing at a top level. There’s the [Continental] Cup coming up too, which is a great opportunity.

RM: I think it was a combination of a lot of things. I mean Cracovia is one of the top teams in the league, and it’s a good chance to win the championship. That’s why we play hockey – to win.

So far, winning has been just about all the team has done since the cousins joined. After our conversation, Cracovia travelled to Tilburg, Holland, where they face three top teams from Spain, Estonia, and the home team Tilburg Trappers, and outscored all comers with 24 to 6, sweeping the round. The tournament, the IIHF Continental Cup, will resume in Rouen, France on 26-28 November.