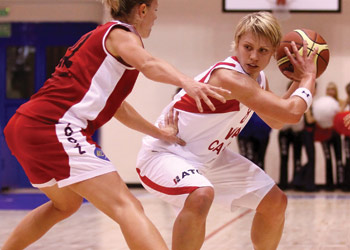 After a magnificent start in the Polish top league with six straight victories, Wisła Can-Pack dropped the first game of its Euroleague campaign against France’s USO Mondeville, 76-65.

The Krakow women’s basketball team started the game strong and led by nine points at the half-time break, but they were unable to hold their lead as the French club clamped down on defence and rallied in the third quarter, assembling a stunning 15-1 scoring run. Still, the end of period three saw the Wiślaczki behind by only two points. They then continued to lose ground, leaving the court 11 points down after USO used the fourth period to rain down three-pointers on the Polish club, and continued to maintain defensive control.

USO’s withering three-point attack was led by American Lenae Williams, who ended the game with 20 points. The victory represents a major comeback for the French side, who have been absent from the competition for the past two years.

The Krakow side’s top scorer was the squad’s major new addition, Erin Philips (pictured), with 18 points. Phillips has played on the Australian national side since age 19, and has assembled an impressive career at age 25, including a silver medal at the Beijing Olympics and a spot on the Connecticut Sun, as well as a Polish league championship last year with LOTOS Gdynia.

Philips’ arrival comes after the departure of Marta Fernandez, the star Barcelona-born guard and Spanish national team member who helped Wisła kick off last year’s Euroleague group stage competition with an impressive 8-0 winning streak, and go on to become a final four contender, until they were eliminated in the semi-final by ROS Casares Valencia. The Valencia squad was sufficiently impressed with Fernandez to pick her up during the off-season.