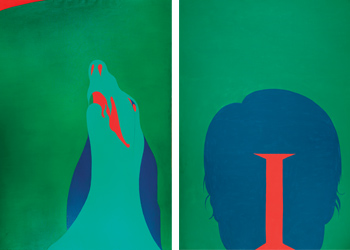 Jurry was found on a winter’s morning in 1980. He was 37. On the surface, the discovery of a hardened drinker lying cold on the pavement in Warsaw’s Praga district was not such an eccentric occurrence (even today, many view the place as a no-go-area). The painter had apparently fallen from the window of his fourth floor flat. Such was the way of the world. Yet the official explanation failed to convince many. A second, more sinister version holds that Jurry was found at the bottom of the stairwell, hands tied behind his back with electric cable, a direct echo of the death of student Stanisław Pyas, the anti-communist activist who “fell down the stairs” in 1977. When Jurry’s sister-in-law came to identify the body, she noticed traces on his wrists of foul play. On entering his flat-cum-studio, there was no evidence of a drinking binge. Some paintings were lined up, ready to be exhibited, and there was breakfast on the table, half-eaten. Jurry’s friends were unanimous that he was not the suicidal type. On the contrary, he had a voracious lust for life.

Such dramatic exits have the propensity to catapult the deceased to iconic status. Yet Jurry’s untimely demise precipitated a virtual disappearance from the public sphere. Even today, when the Internet has spread its tentacles into every nook of counterculture, Jurry lacks even a single sentence on cyber-behemoths like Wikipedia. Besides a small coterie of veteran artists and critics, he has been all but forgotten. Yet change is afoot.

The current, two-pronged show at the National Museum and Galeria Zderzak reveals one of the most distinctive Polish artists of the post-war era. Jurry was the only Polish painter to take up the Pop Art mantle, and his striking, witty and elegantly composed canvases are shot through with an impassioned engagement with the dilemmas of his age. For above all, Jurry was not merely following a hip Western fashion. During a period when artists could have a cushy time if they played the Communist Party’s game, he was uncompromising in his stance. This painter, whose favourite apparel was a Napoleonic jacket with gold epaulettes, and who felt most at home sinking vodkas in some of Warsaw’s dodgiest bars – occasionally smashing tables over the heads of the clientèle – was a whole-hearted rebel, but a rebel with a cause.

Jerzy “Jurry” Zieliński was born in a village near Kielce in the midst of the Second World War. His parents were modest, farming folk. Later in life, Jurry would relish cracking jokes about his humble origins. Nevertheless, the spirit of rebellion was very much alive in the family home. Whilst Jurry was learning to crawl, his godmother was carrying out clandestine missions in the area for the AK, the underground “Home Army” that was loyal to the Polish government-in-exile. Later, as a young boy on a school trip to Krakow, Jurry showed his single-minded attitude in no uncertain terms. Apparently contemptuous of his teacher’s skills as a guide, he slipped away from the group, and conducted his own, solitary tour of Poland’s former royal capital. He reappeared two days later, unfazed by the fiasco he had caused. For an 11-year-old boy, this showed considerable spunk.

Fortunately, Jurry’s artistic talents did not pass unnoticed. He won a place at Warsaw’s Art Academy, where he was quick to make waves. At his debut show in 1967 – a year before he even graduated – the cream of the art world descended. This was simply unheard of for a student. The fact is all the more interesting given that in terms of technique at least, Jurry was completely at odds with his professor.

The following year, Jurry was due to graduate, yet 1968 would prove to be an explosive year. Warsaw was the scene of virulent student protests calling for freedom of speech. The demonstrations were put down by brute force, and thousands were arrested. Jurry himself managed to get beaten up, although it’s unclear whether he was taking part in an action or just in the wrong place at the wrong time. There was further outrage when Polish troops were drafted in to help quell the Prague Spring, the pro-democracy movement that unfolded in tandem with the Warsaw unrest.

“I think that 1968 was the watershed in his life,” says Marta Tarabuła, curator of the current show and herself a veteran of anti-communist intrigue. “It reinforced him in his rebellious attitude.”

That same year, Jurry painted a memorable canvas called Gorący (Hot), with flames licking across a man’s face. It was a tribute to Ryszard Siwiec, the Pole who set himself alight in protest against the Prague invasion.

At first glance, Jurry’s self-portrait of 1969, Jam(I am), might appear a somewhat unassuming statement. Yet this large painting (pictured above right), which belongs to a series called “New Creations of the World”, is anything but humble. Jurry’s silhouette resembles a bust of a Roman god. Poised decisively in the middle is the English word “I”, resolute in red like a classical column. It’s a decidedly purposeful declaration, all the more so in that on closer inspection, the proud “I” reveals itself to be two doors opening into the “flaming furnace” of the artist’s mind.

“He is claiming to be a prophet, a god who gathers all the creative powers in himself,” Tarabuła reflects. “He was not modest – that we must admit,” she adds with a chuckle.

For the next decade, Jurry’s commitment to anti-communist statements was unflinching. A vintage example is The Smile: Thirty Years (1974), which was rustled up to coincide with the 30th anniversary of Stalin’s puppet regime in Poland. The painting, which shows a mouth in the colours of the Polish flag (see above), bore three crosses over the lips, a seemingly unequivocal comment on the lack of free speech. The story goes that when pulled in for interrogation, Jurry had the bravado to declare that the letters were in fact written in the language of Poland’s Russian “comrades”, the three Xs thus translating as “Ha, Ha, Ha.” In this light – the painter so eagerly assured them – it was a tremendously happy, positive painting. Perhaps unsurprisingly, the powers that be did not buy the story, and the painting was banned.

Solidarity Icon that Never Was

Given his uncompromising stance, it appears that the press gradually cooled towards Jurry. He had the habit of making statements that could hardly endear him to the authorities. Did this eventually cost the artist his life? This may be gilding the legend. Perhaps it really was just an accident. Indeed, there’s a ring of truth to one rather prosaic version of the story. The gist goes that some friends locked the painter in his flat as a prank. He climbed out the window, slipped, and fell. All the same, it doesn’t take a great leap of the imagination to surmise that Jurry would have emerged triumphant had he lived another year.

“He had the bad luck to live his whole life under the communist system,” Tarabuła muses. “And he died just before the Solidarity movement began.”

As it turned out, some of the most memorable images of the ensuing era were those by Poland’s poster artists. The striking Solidarity logo itself is now ingrained in the world’s consciousness. Given the ease with which the Pop Art style could be adapted to such forms, Jurry would have been the right man in the right place. The painter’s friend, the photographer Erazm Ciołek, was merited with an award from the Solidarity union for chronicling the Gdańsk shipyard protests. Ciołek had previously shot many of Jurry’s own happenings, including his mischievous, open-air “anti-May Day” intrigues (which involved art and alcohol in equal measure). Finally, Jurry would have been in his element.

“He was a pure Romantic,” Tarabuła concludes. And of course, like so many Polish Romantics, not least Chopin himself, Jurry was destined to make an early departure from the stage. Yet thanks to the current show, the painter is back on the map. His Pop Art à la Polonaise deserves a permanent page in the annals of his nation’s cultural history. One can almost hear his reaction echoing down from the great gig in the sky: “Ha, Ha, Ha….”