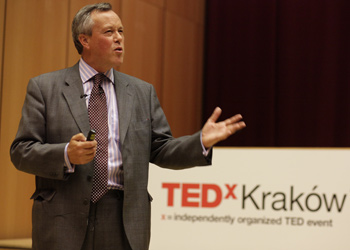 Last month, former diplomat Charles Crawford spoke at the TEDxKrakow conference, an independently-organised TED (Technology, Entertainment, and Design) event featuring speakers on a variety of topics loosely related to Krakow, sharing ideas worth spreading. At TEDxKrakow, Crawford used the theories of kinetic physics to explain the EU’s diplomatic predicament. When he spoke to Krakow Post journalist Jamie Stokes a few months ago, Crawford, a member of the UK Foreign and Commonwealth Office since 1979 and British Ambassador to Warsaw from 2003 to 2007, shared his views of Poland’s place on the European stage.

Charles Crawford: No. Poland is poorer than it would have been had everyone else been richer. But Poland has avoided some of the crass errors made in the UK and elsewhere, and its population all too well remembers very hard times and so is resilient. The banking sector is run by people who are ambitious but hard-headed, focused on building national wealth in a systematic and non-speculative way. Plus most individual Polish consumers are not mired in debt like I am.

Poland’s basic advantage is because it had to set up a market economy in effect from scratch, it has people at the heart of policy-making who understand and insist on very basic principles, such as honest money. In my final few months in Warsaw I hosted a dinner at which Leszek Balcerowicz was guest of honour. In introducing him I read out my favourite Ayn Rand quotation: “Your wallet is your statement of hope that somewhere in the world around you there are men who will not default on that moral principle which is the root of money”.

Poland – in good part thanks to Mr. Balcerowicz personally – understands and cherishes that core idea. How many other countries do?

KP: Which country benefited the most from the Polish economic exodus to the UK?

CC: Things come and go. Four hundred years ago it was the Scots sailing to Poland in large numbers to make a living.

The sheer scale of the transfer of Poles to the UK in recent years has been one of the greatest peacetime social experiments in world history, with the results massively positive on most fronts. In the short term the “winner” probably was the UK, but in the longer term Poland will have done well too. We in the UK have set up insane socialistic policies which allow large numbers of young people to leave school barely educated and then live on welfare, baffled by the ideas of work and responsibility. So it has suited us to bring in an army of well-educated Polish people to do many of the jobs which our own people are unable or unwilling to do, and help us create wealth to pay for this tragic domestic “underclass”.

As Poland develops and things here in the UK get harder, the tide will turn and plenty of skilled people now with excellent English will go back to Poland to create wealth there, leaving us with our miserable problems.

KP: Relations between Poland and the UK have had their ups and downs over the decades. How would you characterize the current relationship between the two countries?

CC: I am no longer playing any part in the political/diplomatic relationship, but it looks from the outside to be much better than when I was Ambassador – some cause and effect there? My years in Poland (2003-07) saw incessant domestic political instability in Poland – four Prime Ministers – but a well-placed Labour Government in the UK. Now Poland has the continuity and we have said goodbye to a burned-out Labour government. On it all goes.

KP: Which states are Poland’s natural allies in the European Union and which will are its rivals?

CC: I tend to fear that on EU issues, Poland and the UK will end up being not as close as they might be, since Poland has a strategic interest in getting lots of EU money and will soon get hooked on CAP [Common Agricultural Policy] payments. This means that Poland could tend to fall in behind France as an opponent of radical reform to the EU budget process, a pity since the levels of waste in policies like these are morally unsustainable and undermine overall EU effectiveness.

Poland’s “rivals” for EU funds will tend to be those countries in southern Europe which have wasted vast sums of EU money and now are in serious structural difficulties. Poland should be at the forefront in insisting on hard and painful reforms in such countries as a price for further collective support, and more generally in seeking less wasteful EU spending.

More generally there is a strong or at least noisy anti-EU tendency in the UK which has no comparison anywhere else in Europe. This is likely to grow, as more and more decisions are taken at the Brussels level. It, to some degree, dilutes high-level British impact in the EU. Against that the UK will remain a firm proponent of enlargement and energetic active policies towards the former Soviet area, so plenty of common ground there.

KP: If you could be absolute ruler of Poland for a day, what decrees would you issue?