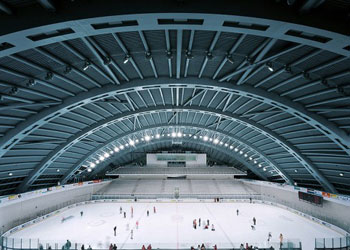 A handful of dedicated Cracovia fans travelled over 1,000 kilometres to Tilburg, Holland to see their team play in the international IIHF Continental Cup tournament for European ice hockey clubs, and returned early this week hoarse from cheering their favourites to three consecutive victories and a stunning total of 24 goals in just over 48 hours.

The Krakow squad has manhandled the Polish league competition through the early rounds of the season, out-skating, out-shooting, and out-working the Polish clubs. Before the trip to Holland, players expressed eagerness to face the three clubs from other European leagues, starting with Kohtla-Järve Viru Sputnik on Friday, then CH Jaca on Saturday, followed by the home team, the Tilburg Trappers.

The first opponent, Kohtla-Järve Viru Sputnik, is the reigning champion of Estonia – in a league with only three teams and that is still reeling from financial problems relating to the 2007 credit meltdown that shut down clubs and ice centres. They also came reinforced with some loan players from the other two clubs. Nevertheless, they were in no way a match for Cracovia, who dominated in puck possession and stayed focused on defence to keep a clean sheet even through a 97-second two-man advantage.

After scoring early, they grew hungrier for goals as more and more opportunities presented themselves. After finishing the first period up 1-0, they picked up steam in the second, scoring four goals in as many minutes. When Kohtla-Järve Viru Sputnik finally put one on the board in the 51st minute, Cracovia rallied to slam home four more in response, only to narrowly miss a double-digit score when Patrik Prokop dinged one off the Estonian goalpost in the waning seconds.

The wait for the double-digit score would only last overnight in any case, when the team spent the following afternoon dismantling Spain’s CH Jaca, who finished second in the Spanish League last year. Jaca, who play in what may be Europe’s most gorgeous ice arena (pictured) made a fair showing in the first round against weak competition, notably crushing Israel’s Bat Yam HC 15 to zip. They got an idea of how that drubbing must have felt on Saturday, as they were unable to put up any credible resistance to Cracovia. The Krakow squad scored 10 goals by eight different players, with two-fers from Leszek
Laszkiewicz Mikołaj Łopuski.

While those victories were expected, the Sunday match against the Tilburg native Destil Tilburg Trappers was the pairing that Cracovia went there to win. The Dutch squad features a number of international players, including four Canadians, two Russians, a Finn, a Swede, and interestingly, a Dutch-Turkish dual citizen. While they are not the current champs, Tilburg has more Dutch championships to its name than any other club, and has won the title twice in the last four years.

The final match of the round started out a defensive struggle, until Cracovia’s new forward David Kostuch opened the scoring in the 24th minute. Tilburg struck back almost immediately, with two quick goals from Richie Van Hulten and Mickey Bastings over the following three minutes. After those goals, both teams ramped up their checking games, with increasingly emotional play leading to whistles blown against both sides. As the buzzer sounded for the end of the second, Cracovia still trailed by one.

The pace of the match continued to increase in the third, turning into a wild see-saw battle for supremacy, with a total of six goals going in at both ends. The deciding shot coming off of a bold charge to the net by Mikołaj Łopuski from the right circle with a defender on his hip, finding the twine behind dutch net-minder Ian Meierdres. The match was to prove to be one of the finest displays of tough defence and creative offense put on by a Polish club in recent memory.

The next round of the Continental Cup will take place 26-28 November in Rouen, France.