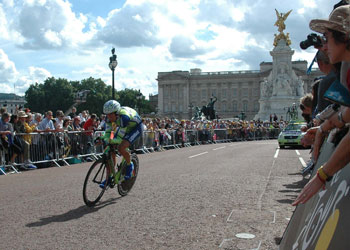 After not making the cut for hosting the Euro 2012, Krakow is apparently setting its sights on the biggest bicycle race in the world. Gazeta Wyborcza reported today that during a recent press conference, the director of the Tour de France, Christian Prudhomme, confirmed that Krakow had voiced an interest in organizing the first leg of the race, as London did three years prior.

While city officials seemed surprised by the announcement, Wyborcza was able to track down a letter from Mayor Jacek Majchrowski to Prudhomme, in which the city of Krakow officially declared candidacy for hosting the Tour de France within the next decade. The letter appoints Bogdan Koraszewski, chairman of the Royal Academy of Cycling (Królewska Akademia Rowerowa) and cycling judge as the intermediary for future talks on the subject. The idea to host the race in Krakow originally came from Koraszewski, who is proposing the track between Krakow and Zakopane for the start of the race.

The associated costs of hosting such an event are daunting: the registration fee alone is 500,000 euro, and London reportedly spent a total of 10 million euro when organizing the event in 2007. But if in fact the city manages to meet all the requirements and win out against other richer European cities, it won’t be reaching into its own coffers to cover the costs. City officials stated that only private sponsorships and/or EU funds would be used. They are scheduled to meet with Prudhomme before the end of the year to discuss the bid.