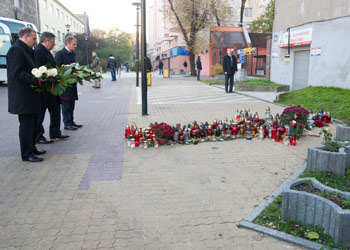 Last Tuesday, armed with a pre-war handgun, a knife, a Taser, and tear gas, an older man stormed the Law and Justice (PiS) party headquarters in Łódź. He fired several bullets, killing Marek Rosiak, the assistant to Member of the European Parliament (MEP) Janusz Wojciechowski. He then turned on Paweł Kowalski, assistant to PiS Representative to the Sejm Jarosław Jagiełło, slitting his throat with the knife. Kowalski remains in hospital after undergoing a tracheotomy, but his life is no longer in danger.

The attacker, 62-year-old Ryszard C., a taxi driver and resident of Częstochowa, claims he was given a few months to live after recently being diagnosed with cancer. His motivation: to “kill Kaczyński”. Upon his arrest, he repeated this motive, lamenting that he hadn’t prepared enough weapons to reach his goal. Later, he reported that he was out to kill “any politician, from whatever party, so that they wouldn’t feel so sure of themselves”. After carrying out the crime, he demanded a press conference be organized so he could explain himself and read a statement he had prepared earlier. Ryszard C. remains in police custody. As of yet, he does not have a defense attorney. If psychiatrists find him to be insane, the prosecutors will have to ask that he be kept in a closed psychiatric institution.

After this shocking event, leader of the PiS party Jarosław Kaczyński, the twin brother of recently deceased former President Lech Kaczyński, made a statement to the media claiming that the killing was the result of a campaign of hate led by the ruling Civic Platform (PO) party. He continued, saying that from now on, any verbal attack on PiS politicians will be viewed as an incitement to murder. This was followed by reactions from all sides, some calling him overly emotional, others backing his opinion. Some claimed the murder was clearly politically motivated, while others called it a crazed act, and one headline in Gazeta Wyborcza read, ”The First Victim of the Poland vs. Poland War”.

On Thursday of last week, when he was scheduled to meet with President Komorowski, Kaczyński instead went to Łódź to meet with the family of Rosiak and to visit Kowalski in hospital.

The next day, 22 October, the PiS party posted a “Łódź Declaration” to its website against the hate campaign between the two parties, noting examples of PO representatives speaking out against members and constituents of the PiS party. The declaration ends with a call to public servants, journalists, and citizens alike to sign in support, and Kaczyński has since demanded the signature of President Komorowski. PO sympathizers claim that the document could be taken more seriously, if it was co-written by both Komorowski and Kaczyński, instead of pointing fingers at the PO.

On Saturday, 23 October, President Komorowski, Prime Minister Donald Tusk, and PO representative to the Sejm Grzegorz Schetyna, all said prayer and left flowers and candle-lit lanterns at the PiS headquarters in Łódź.

This coming Thursday, Marek Rosiak will be laid to rest after mass at the Łódź Cathedral, where both Jarosław Kaczyński, leader of PiS, and Janusz Wojciechowski, MEP (and Rosiak’s boss) will speak.