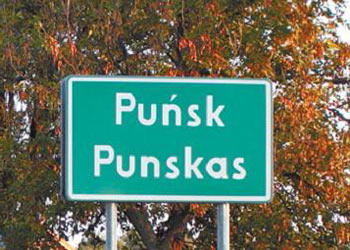 Polish European Deputy Boguslaw Sonik (PO) has urged the European Union to prepare a report on the conditions of the 250,000 Poles living in Lithuania, who represent the largest ethnic group in the country along with the Russian community. The latter represents 6.31 percent of the total population of the country, according to the latest census conducted by Vilnius.

Sonik, a former desk jockey of the Solidarność trade union in the Lesser Poland Voivodeship, is convinced that the Polish minority is facing linguistic discrimination in Lithuania, reflected in the refusal to use bilingual road signs in the outskirts of Vilnius, which are densely inhabited by Poles.

According to Sonik, Lithuanian authorities keep refusing to use standard Polish orthography in the transcriptions of the names of Polish residents in the Baltic country. This situation has also been denounced by the Electoral Action of Poles in Lithuania, a minority Christian-conservative party headed by Euro-Deputy Waldemar Tomaszewski (“Valdemar Tomaševski” according to Lithuanian orthography).

Moreover, the Polish community has also expressed its concern about the Lithuanian land policy following the post-Soviet country’s “re-privatisation”. The Polish minority has objected to bureaucratic delays in the reassignment of Lithuanian lands annexed by Poland in 1922 before the German invasion of both countries.

“Despite Lithuanian adhesion to the Framework Convention for the Protection of National Minorities enacted by the Council of Europe, Lithuania keeps disrespecting the rights of the Polish minority,” says Sonik, pointing out that the 25,000 Lithuanians living in Poland are protected by minority benefits including the optional use of Lithuanian as the teaching language in several primary schools in the Podlaskie Voivodeship.

Although both countries ratified the convention in 2000 before their accession to the EU, Lithuania did not sign the European Charter for Regional or Minority Languages, a treaty ratified by 24 states aiming to safeguard regional and minority languages in Europe. Poland has recently ratified the charter, including Lithuanian amongst the 15 minority languages protected by Warsaw.

“If Poles don’t want to integrate themselves into Lithuanian life and culture, they are free to return to their native country,” declared Justinas Kanosas, member of the Seimas, the Lithuanian unicameral parliament and number two on the Committee on Foreign Relations in the Dalia Gribauskaite presidential cabinet formed in 2009.

Polish media have reported that bilateral relations between the countries have worsened since the retirement of the first president of independent Lithuania, Algirdas Brazauskas. In 1994, both states signed a Treaty of Friendship and Cooperation, boosting bilateral relations between the two countries that had fought together against the Teutonic Knights, before forming a commonwealth state ratified in 1569 by the Union of Lublin.

Polish irritation towards Lithuania has risen progressively since the takeover of a Lithuanian refinery by Polish petroleum company PKN Orlen in Mažeikiai. The facility, acquired from the dissolved Russian giant Yukol in 2006, was immediately the victim of a fire during the sales negotiation, causing damages of 50 million USD partially refunded by insurance companies. Furthermore, the refinery’s activities have often been paralysed by the strikes of Lithuanian workers demanding salary increases.

Though Poland has threatened to halt the building of an electricity network linking the countries, scheduled for 2015, presumably both countries are not willing to improve their bilateral relations. After joining forces to enter the EU, Warsaw and Vilinius became progressively indifferent towards each other. Since then, both countries have turned their attentions to Russian gas, suffering from a high level of energy dependency on Moscow.