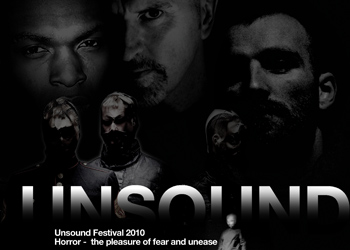 The 2010 edition of the Unsound festival has brought a series on new and innovative takes on old forms in the horror genre, from the screenings of horror films on VHS to the return of legends Lustmord or Goblin. Perhaps the most eagerly anticipated reinterpretation will take place tonight, at the world premiere of “We Don’t Need Other Worlds, We Need Mirrors”, a new soundtrack to Andrei Tarkovsky’s 1972 film adaptation of Stanislaw Lem’s classic, Solaris. I sat down with Ben Frost and Daniel Bjarnason and asked them for a preview of tonight’s performance.

Krakow Post: How did the Solaris Project come about?

Ben Frost: It was actually Mat’s [Schulz] idea; in the beginning, at least, he was the driving force behind it. The whole thing more or less was born out of drunken tirades I went on about how the music in Tarkovsky’s film was not to my liking. At some point I got a phone call from Mat and he basically told me to put my money where my mouth is, to write new music. That then became the idea of first of all a collaboration with the Sinfonietta, and then my immediate thought was that this was not something I wanted to do on my own, and I really wanted an excuse to work with Daniel [Bjarnason].

KP: What can the audience expect tonight?

Daniel Bjarnason: If they’re hoping for a new soundtrack for the movie, they’re going to be disappointed, because it’s not going to be that. The movie will be present yet absent at the same time.

BF: The film itself, I quickly realised, was only relative in the initial creation of the work. As soon as we had taken what we needed from it, it became unnecessary.

DB: It’s like a cocoon that’s shed and left behind, because it grew out of that and it set the pace for the music, but then the music took on its own life.

BF: Working to film is a really interesting way of writing music, because it’s a one-way dialogue. You can only respond to the film, the film is not going to respond to you. So what’s interesting is that it creates all of these really often odd structural changes in your music which you wouldn’t naturally go to, had the film not been dominating the way you move. So then it becomes even more abstract when you remove that reference point for the audience, and you’re left with this new thing that was born out of something else.

I was interested in the project at a kind of macroscopic level – the connections that we were drawing between the way we were approaching the music and the actual internal ideas of the story of Solaris. This idea of translation and of synthesis of something new from a fragmented memory of something that existed previously – that’s essentially what the story is about.

I just had a realisation in the last couple of weeks – it was a real fearful moment for me, actually – that there is a very real possibility that we have interpreted this story completely wrong, in the sense that I never read the novel. The film occurred much later, and I found the film as a Westerner that can’t speak Russian, so I’m responding to this story with English subtitles on a Russian film via a French translation of a Polish novel. The number of changes this has gone through before it ever reached me is really quite frightening, and then you have to add to that the social and political context of Solaris – where and when it was written – and the politics that surrounded it. Most people of a certain age [in Poland] think of Solaris as a thinly veiled commentary on Soviet-era Poland, and that just never entered into our approximation of it at all, because we have no reference point for that.

KP: There’s a second part of the program, the film manipulations by Brian Eno and Nick Robertson. What exactly will that entail?

DB: When we decided we weren’t going to have the film screened [during the performance], there was a gap there, because we’ll be in a cinema and we’re doing this music without the film. So the last time we were here, in August, Brian Eno was there and he had the idea to use the film in a certain way, so it would show these frames of the film shifting into each other very slowly, so most of what you see is new and doesn’t exist – these frames are always slowly morphing, always moving. That fit very nicely with this concert of mutation and morphing through various levels of interpretation.

The concert will take place tonight, 24 October at 7 pm in the Kijow Cinema, al. Krasinskiego 34.