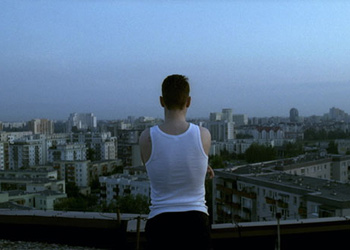 Yesterday, the creators of the movie Chrzest (The Christening) screened their acclaimed new film in Krakow’s Pod Baranami cinema. Today it hits the big screens all over Poland. The Krakow Post was able to sit down with the film’s director Marcin Wrona, lead actor Tomasz Schuchardt, and producer Marek Rudnicki to talk about the making and future of the psychological drama.

The film explores the relationship between two childhood friends with a criminal past, who are reunited after one is released from jail and the other has started his own family and a very successful, legal business. They each face a difficult decision in a situation with no easy way out. What’s more, the storyline was based on a true story that took place in Warsaw, according to director Marcin Wrona.

Krakow Post: How did the making of this film come about? How did you find out about the screenplay?

Marcin Wrona: I first heard about this story 10 years ago. It’s based on a true story that took place in Warsaw, in fact. Grzegorz Jankowski, who wrote the screenplay, personally knew the people who were involved in the actual event.

At first glance, it is a gangster story, but when I read it, what was apparent to me was the universality of its messages. The Cain and Abel references, the self-sacrifice, the motif of a christening… I didn’t want to make a criminal film, I wanted it to have greater appeal, to be about life’s decisions. For example, on the one hand, the choice of a life that seems more boring, that includes starting a family and having a career but in this situation is actually more difficult than leading a criminal life, which, though certainly more exciting, is a path to nowhere.

In this way, the conflict between good and evil became clear to me, and it lifted the script out of the depths of becoming another gangster film. I was more interested in showing my impressions, the universal context to the work, than portraying the story as it really happened.

KP: What kind of preparation work was done for the film? There’s obviously a lot involved in recreating this kind of deeply psychological experience…

MW: I knew this film would be modest, based on the actors, deeply emotional in that way… so to waken these emotions, we had to put ourselves in the situation where we could imagine such an experience. We talked to prison psychologists and even to convicts themselves. The convicts actually became very engaged with this project, some even re-wrote the screenplay that we provided them. They had such good insight, that some of these rewrites even made it into the final shots in the film.

So it was a documentary journey, to meet with and understand the people who lived these kinds of events, I had to bring that experience to the actors and it really added to the final product. I really enjoy working with actors, I have a background in theatre, so casting was also very important… the actors had to really function in these roles, the movie depended on them.

KP: What was the most difficult part of directing this film?

MW: The hardest part was what I just described, really – finding the right actors. I think I went through every actor I could think of, I auditioned them all, but I needed to find the people who could realize the vision I was having.

Tomek [Tomasz Schuchardt, who plays Janek], for example, is a complete debutante, while Wojtek [Wojciech Zieliński, who plays Michał] is experienced, well established. So Tomek was actually learning a bit about big screen acting from Wojtek during the making of the film. This real life situation translated very well into the script, where his character, Janek, is also learning from Michał… this kind of dynamic was essential, very important to making this movie.

KP: Will audiences abroad be able to see this film?

MW: We have an international distributor, M Appeal, which is working on sending it out. It had its world premier at the Toronto International Film Festival this year and then generated a lot of interest at the Film Festival in San Sebastian [Spain]. It was also shown in Rekjavik and Gdynia [where it won the Silver Lion], and Warsaw. Tomorrow it goes out to cinemas all over Poland.

The next few months will tell what will happen with its international distribution. I think it would do well internationally… it isn’t a subject unique to Poland, it has a very universal theme, which gives it wide audience appeal.

KP: What’s next? With regards to this film, or any other projects you have in mind.

MW: Well, this movie hits the screens tomorrow, which is when my work with it comes to a sort of end. Now I just have to sit back and watch the results.

As for my next project, I hope very much to make another feature film, to complete the trilogy of sorts. My first was Moja Krew (My Blood, 2009) and Chrzest is tied to that film in a way. Now I would like to do a third one that is somewhat tied to Chrzest. I have something in mind already, we’re just in the process of writing the screenplay at this point.