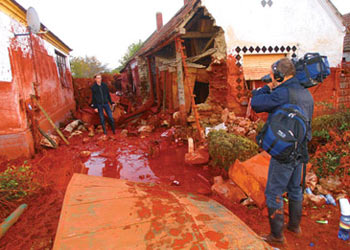 Unexpected crises are moments that can make or break political leaders. They either flounder around for solutions, as happened with US President Barack Obama during the BP oil spill, or rise to the occasion, as Hungarian Prime Minister Viktor Orbán did in reaction to the 4 October red sludge catastrophe in western Hungary.

Indeed, such was Orbán’s perspicacity that he managed to use the occasion as a means to justify his government’s efforts to strengthen state power and exercise massive control over market players in the name of “public interest”.

One week after the disaster struck, killing at least nine people and injuring at least 120 in the villages of Kolontár and Devecser, parliament passed a law authorising the state to temporarily take over Magyar Alumínium Zrt. (MAL), the company behind the deadly spill. The state also froze the company’s assets. The rationale was that the government needed to ensure that MAL’s management does not use legal tricks in order to dodge responsibility. What’s more, MAL is the country’s sole aluminum producer and employs 1,100 people directly and 1,500 indirectly – in Hungarian terms, “too big to fail”…

Read more at The Budapest Times.