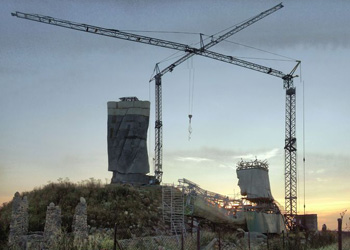 The small town of Świebodzin in northwest Poland is ordinarily nothing more than a rest stop at an intersection between two highways for most travellers. Soon, however, it will boast an attraction worth travelling to – or so its citizens hope.

That is because in November, a 35-metre effigy of Jesus Christ will be completed in the town, which will make it the tallest statue of the deity in existence. At present, the record holder is Bolivia’s Cristo de la Concodia (34.2 metres), followed by the more famous Christ the Redeemer in Rio de Janeiro (30.1 metres without its pedestal).

According to the Wprost, the giant statue is meant to be a year-round tourist attraction for the town of about 21,000 inhabitants. It will be visible from both the A2 highway and S3 expressway that run through the town.

The statue was designed by priest Sylvester Zawadzki and is being built using private donations collected from residents of the area. The final challenge before its completion will be the placement of the completed head on the body, due to take place next month.