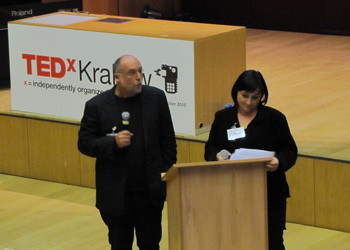 What do you get when you put an atomic particle physicist, Holocaust descendants, some organic farmers, a few musicians, a hypnotist, and a British diplomat in a room together with a microphone? Apparently, a captive audience willing to spend six plus hours listening to them, as was demonstrated by TEDxKrakow, an independently orgainsed TED (Technology, Entertainment, Design) conference.
The theme on 15 October was tradition meets modernism, and appropriately so. While the conference took place in the modern Auditorium Maximum of the Jagiellonian University, the speakers espoused everything from age old wisdom to their predictions of the future, and showed how they have been able to make a living off of them with the power of believing in your own ideas.

The conference kicked off with Uwe von Seltmann, who alluded to the words of wisdom from Bob Dylan, that are so frequently apropos to life. In particular, Dylan’s comment on knowing the past in order to control the future set the stage for Seltmann’s talk, “The Future of the Past.” His story brought goosebumps to the entire audience as he related his discovery that when he was just a boy being raised in Germany, he discovered that his father was born in Krakow (during the war mind you), which led him to uncover the horrible family secret: his grandfather had been an SS-man working in various concentration camps in the area.

After being ostracised from many in his family for bringing ill-repute to their name with his discovery, his career in journalism continued to bring him back to Krakow from time to time. On one such trip, when asked what he was doing by a small group of people at the local Kazimierz haunt, Singer, he decided to tell them about the book he was writing about the story of his grandfather, an SS-man at Auschwitz. After an uncomfortable silence, a woman from the group said her grandfather had been killed at Auschwitz, after which came another bout of silence. Who would have thought this could be the beginning of a love story? A year later the two were married and have since started the project “Two families, two pasts, one future”, which is an effort to learn about what was hidden from them while growing up, help their families finally make peace with their history, and teach it to others. He concluded with the chilling but motivating words of Hermann Hesse: “Anything that has not been suffered and solved to the end will return”.

This was followed by presentations on the uncertain future of traditional, small family farms in Poland and a pitch for local organic food by Goldman Prize-winning (the Nobel for environmentalists) Jawiga Łopata. Then came the stories of “Wojtek the Soldier Bear” of the Anders Army and how Richard Lucas is using the bear’s viral potential to bring the previously censored history to audiences all over the world through Facebook and YouTube; Andrew Shapiro, a classical pianist who brings music to the masses via McDonalds; and the uncanny methods of Polish gaming gurus Michał Kiciński and Marcin Iwiński, who pledged allegiance to the role of “black sheep” in the industry.

Other highlights included a talk by Ewa Sadowska, who was raised on a farm that essentially housed and employed homeless, recovered addicts and alcoholics, prostitutes and abandoned elderly, and later used their recovery stories to help get Eastern European migrants off the streets in the West. Two eccentric music showcases later, the audience left armed with dinner conversations and food for thought galore. Topics ranged from how to achieve success from a Polish venture capitalist to the basics of molecular biology, taught by Professor Paweł Moskal for his talk on “Antimatter based molecular imaging of the whole human body,” or why a British diplomat thought the kinetic energy of the EU was making it ineffective. A talk on the future of technology demonstrated how we’ll be using our brains to activate mobile devices, and the event drew to a close with a hypnosis demonstration.

The live broadcast of TEDxKrakow was made available to audiences all over the world thanks to StreamOnline, with viewing parties or “meet-ups” scheduled on the same day, 15 October, in New York, Chicago, Cambridge and even Beirut. If your interest is piqued, watch the live recording at the TEDxKrakow website or Facebook page.