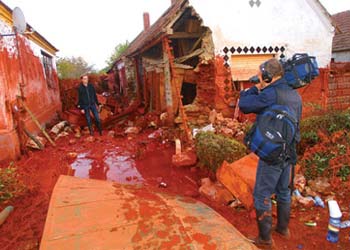 At least seven people have died and dozens remain in hospital after thousands of tonnes of red sludge flooded from an aluminium factory and washed through villages in central Hungary last Monday. Over a hundred people required emergency treatment for burns caused by prolonged exposure to the caustic liquid. Residents of Kolontár, which sits in the shadow of the Ajka alumina plant, 160km southwest of the capital, had to climb onto walls and rooftops as a two-metre-high wave of toxic slurry swept through the village.

The effluent poured through the breached dam of a huge waste storage reservoir shortly after noon. The torrent tore through Kolontár and flowed on to nearby Devecser. Later in the afternoon, 40 people had to be evacuated as the mud slick reached the village of Somlóvásárhely, about ten kilometres from the reservoir that breached.

By midweek the flood had left at least 50 square kilometres of countryside covered in a thick, rust-red sludge, and the caustic liquid had poisoned local waterways, killing aquatic life in the Marcal river downstream of the factory. Hundreds of people were in temporary accommodation, unable to return to their poisoned homes.

Read more at The Budapest Times.