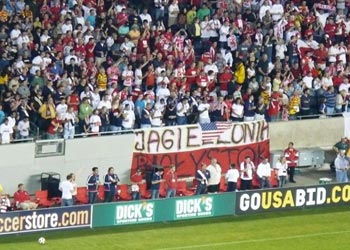 CHICAGO– Red and white were the colours of the evening and the crowd was mostly pro Team Poland – perhaps unsurprising given that Chicago is known as the the second biggest Polish city in the world. The ‘Friendly’ had 31,696 turn out to Soldier Field as the national teams of Poland and the USA battled to a 2-2 tie.

At the 73rd minute, Polish midfielder Jakub Blaszczykowski got the equalizer. The Polish tie goal came when Blaszczykowski took extra time to line up his shot and send it past U.S. goalie Tim Howard.

It was the first meeting between the two national teams since March 2008, when the U.S. blanked Poland 3-0 in Krakow.

Forward Jozy Altidore gave the U.S. a lead in the 13th minute as the 20-year-old striker took a long feed from one-time Chicagoan Jermaine Jones and popped a low shot past Polish goalie Artur Boruc for his second goal of 2010.

Poland had a great opportunity in the U.S. zone and in the 21st minute forward Robert Lewandowski had a one-on-one against Howard. Lewandowski didn’t get much on a shot and the U.S. goalkeeper deflected the ball. After the game, Howard got praises from his coach.

Adam Matuszczyk evened the score for Poland nine minutes later on a short shot. It was great action in front of the net, as U.S. defender Oguchi Onyewu tried to clear the ball. Polish midfielder Ludovic Obraniak picked it up. He made a little pass to Matuszczyk, who took the shot through the legs of midfielder Stuart Holden and past Howard.

In the 43rd minute, Altidore had a great opportunity for the U.S. but Boruc got his hand on the short shot and the ball was deflected.

Onyewu made amends in the 52nd minute and put the U.S. up when he headed a shot past Boruc. It was set up following a great placed corner kick from Holden.

“We paid the price for failure to clear balls,” Bradley added.

Earlier in the week, Eric Lichaj, 21 and a Polish native who grew up in Chicago, had his first call-up to play for the U.S. National Team. “I just want overall progression,” Lichaj said. He has duel citizenship.

A right-back, Lichaj, is one of the bright new talents for Soccer U.S. He signed a new contract with Aston Villa in the English Premier League. Lichaj hopes to get experience to play in the next World Cup for the USA. “That’s how I’ve been going the last couple of years, progressing,” he added.

The future looks good for U.S. Soccer. Thirteen players on the roster were part of the squad that led the U.S. to a first place finish in group play at the FIFA World Cup for the first time in 80 years, and six of those are 25 years old or younger.

Gregory Lato, President of PZPN (the Polish Football Association) gave updates and information concerning the preparations for Euro2012. Poland and the Ukraine will host the tournament.

Before the game, U.S. Soccer saluted Chicago Fire captain, Brian McBride for his contributions to the men’s national team. He played in three World Cups.

The U.S. travels to Philadelphia to play Colombia on Tuesday in Chester, Pennsylvania at PPL Park. It will be another “FRIENDLY”.

(Raymond Rolak is a Michigan based Sports Broadcaster)