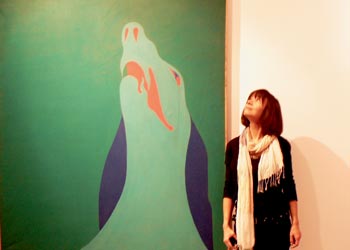 A haze of uncertainty still surrounds his untimely death in 1980, but Jerzy “Jurry” Zieliński made a triumphant return to the Polish art scene on Friday.

A two-pronged exhibition has been launched at Galeria Zderzak and the National Museum, running through till mid-December.

Curator Marta Tarabuła, herself a veteran of the anti-communist tide in Polish art, describes the painter as “a pure Romantic”.

“He had the bad luck to live his whole life under the communist system,” she muses, “and he died just before the Solidarity movement began.”

A typical anecdote dates back to 1974, the year of the 30th anniversary of Stalin’s puppet government. The artist rustled up a commemorative picture called The Smile (Uśmiech) – it was not to the authorities’ tastes. The painting, which showed a pair of lips in the colours of the Polish flag, bore three black crosses over the mouth. Was the painter commenting on the lack of free speech? When pulled in for interrogation, Jurry had the bravado to declare that the letters were in fact written in the language of Poland’s Russian “comrades”, the three Xs thus translating as “Ha, Ha, Ha.” Thus it was a tremendously happy painting. Perhaps unsurprisingly, the powers that be did not buy this story, and the painting was banned.

“The Return of Jurry” runs until December 10th. The principal part of the exhibition can be visited at the National Museum, al. 3 Maja 1. This is complemented by a more intimate show at Marta Tarabuła’s own gallery, Zderzak, at ul. Floriańska 3.